SET mulls next step for gold

Hopes for regional leadership in balance

Talks with major gold dealers over management of a proposed physical gold exchange have failed so far, and the Stock Exchange of Thailand is set to decide its next move early next year.

The SET is still meeting with relevant parties and keenly hopes for a possible solution from gold dealers, as the bourse is aware their role will be crucial in the long-term success of the new exchange, chairman Sathit Limpongpan said. 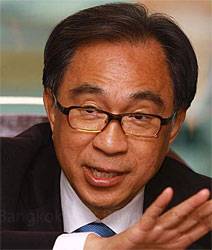 Sathit: High hopes for an agreement in 2015

"We'll accept their proposals through year-end, and the SET will make a decision afterwards. We've been pushing this issue for a long time. Several of our peers have already formed gold exchanges, but Thailand remains stuck in the talking stage," he said.

The SET was open to all proposals from gold traders and had high hopes they could jointly set up the new exchange, Mr Sathit said.

He said spot gold trading was crucial to achieving the SET's goal of becoming the region's leading capital market.

The SET and the Gold Traders Association (GTA) held their latest meeting on Tuesday but still failed to agree on which organisation would manage the physical gold exchange.

The issue has proved a major stumbling block between them despite mutual agreement months ago on establishing an exchange.

GTA president Jitti Tangsithpakdi said setting up the exchange would take time even though the SET, the Securities and Exchange Commission and gold dealers agreed in principle on the issue.

Gold dealers should play a major role in setting direction of the spot gold exchange, he said.

"We should play an active role on the exchange, and at least our current benefits should be maintained. Coordination with the SET will help to boost confidence and trust," Mr Jitti said.

"But I believe the new exchange's trading value will not be very active if the SET runs the new bourse alone."

Kritcharat Hirunyasiri, managing director of MTS Gold, said delays in the spot gold exchange's establishment had halved gold trading volume this year, and the volume would continue declining as long as no progress was made.

"MTS is opening a branch in Singapore as a member of the gold exchange there. We'll start operations early next year. If we don't do anything, our clients will shy away from the Thai market eventually. However, we would certainly consider joining a Thai spot gold exchange," he said.

A source familiar with the matter said the SET should play a role in any spot gold exchange since it had facilities such as a clearinghouse that could serve multiple-currency trading. Moreover, the SET has proved itself credible and trustworthy.

The source admitted the local gold industry was losing competitiveness to regional exchanges and that the volume would probably decline further if the proposed establishment were axed.

"The gold exchange should be on the national agenda and gain support from the government and private companies alike," the source said.

"Parties should think not only of their own benefits. They should consider how to push the SET towards becoming the regional leader, as everyone would benefit from a bigger market."

The source said other regional bourses had moved rapidly to sharpen their competitiveness.

Singapore has set up its own spot gold exchange, while Malaysia has loosened rules and regulations governing listing and joined with other bourses to broaden its product range and trade using other currencies.

"But the Thai market is moving slowly, raising doubts about how it can reach its goal of becoming the regional leader," the source said.

Separately, Mr Jitti forecast gold would move within a narrow range of US$1,140 to $1,240 an ounce this month.

The price could drop slightly on expectations of a US rate rise, as that country's recovery is gaining ground, Mr Jitti added.