Officials from Myanmar and Thailand will meet next month to approve the framework of the initial phase of the delayed Dawei development project. 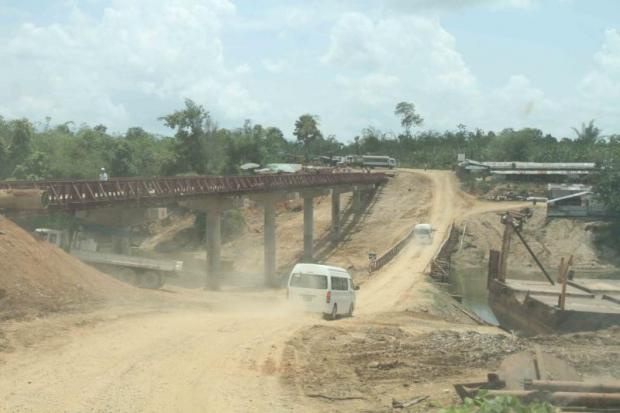 A road and bridge are seen under construction in the Dawei special economic zone. Myanmar and Thai officials are set to meet in Bangkok early next month to discuss projects for the first phase of the much-delayed project. (Photo by Surapol Promsaka na Sakolnakorn)

Arkhom Termpitayapaisith, secretary-general of the National Economic and Social Development Board, said the two countries had already set up policy committees to oversee the scheme.

Deputy Prime Minister MR Pridiyathorn Devakula will chair the Thai committee, which is scheduled to meet its Myanmar counterparts in Bangkok from Jan 7-9.

The development project in Dawei, a Myanmar city situated 350 kilometres west of Bangkok, features a number of megaproject investments including deep-sea ports and a special economic zone SEZ.

In October, the Thai and Myanmar governments agreed to revitalise the project by letting Thai firms play a bigger role in the much-delayed SEZ when Prime Minister Prayut Chan-o-cha paid an official visit to the country.

Mr Arkhom said the policy committees were expected to consider the proposed projects in the first phase proposed by Italian-Thai Development Co (ITD) and Rojana Industrial Park Plc, which were set to develop the road network linking the Thai border with Dawei.

They are the only two companies that proposed the project's development in a bid opened early this year by Dawei Special Economic Zone Development Co, a co-company the Thai and Myanmar governments set up to manage the Dawei project.

ITD and Rojana will develop 27 square kilometres of industrial estate and construct a two-lane road from the Thai border to Dawei as well as develop a port and a power plant.

Mr Arkhom said the meeting might discuss the next step of the development, and Japan would be invited to join this phase.

Previously, Japan was reluctant to invest in the project due to worries over feasibility.

Mr Arkhom said the initial phase was expected to take two or three years to complete, thus the two governments must set further plans as soon as possible.

A motorway connecting Dawei with Laem Chabang deep-sea port in Thailand's Rayong province is also under consideration by the government.

Construction of a 98-km Bang Yai-Kanchanaburi motorway valued at 55.6 billion baht is also set to start next year.