Local banks will waive interregional and interbank ATM withdrawal fees for the long holiday from Dec 31 to Jan 4 as part of measures initiated by the Tourism and Sports Ministry. 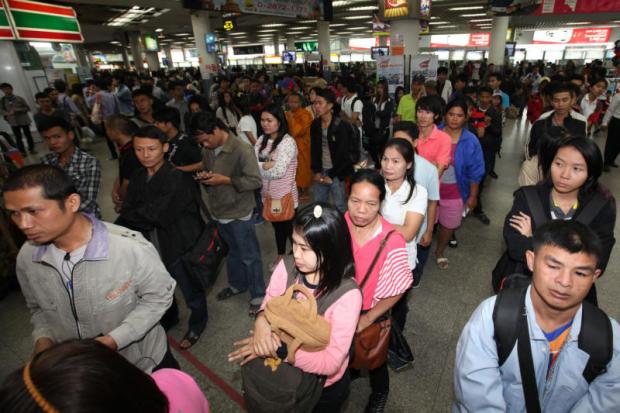 People queue to buy bus tickets to return home for the New Year holidays in this file photo. The government has announced measures aimed at stimulating tourism in the coming festive season. PATTANAPONG HIRUNARD

Other measures aimed at promoting New Year tourism include a plan to use 1,300 petrol stations on major and minor thoroughfares as local tourist information centres.

Some 300 PTT filling stations will participate.

Station attendants will be trained in disseminating information on local sites to tourists stopping in.

The move is also aimed at relieving traffic congestion.

Tourism and Sports Minister Kobkarn Wattanavrangkul said her ministry would also beef up information campaigns via embassies regarding benefits available to foreign tourists such as low-cost travel insurance with premiums of only 650 baht.

The policies are aimed at foreign travellers wanting to visit Thailand but whose travel insurance purchased abroad does not cover this country since it is under martial law.

Available since July 15, the 650-baht policies provide coverage worth 1 million baht against accidents, other medical emergencies, lost or delayed baggage and airport closures. Tourists can buy the policy online.

Ms Kobkarn said she met with the British, Singaporean and Russian ambassadors and found some of them had never heard of the scheme.

Foreign embassies remain concerned about the safety of their citizens travelling to Thailand, she said.

In the first 10 months of this year, foreign tourist arrivals to Thailand fell by 8.7% year-on-year to 19.7 million.

"We started seeing signs of recovery in October."

The campaign is aimed at beefing up domestic travel, seeing revenue distributed upcountry and encouraging local communities to take care of their cultural treasures.

The "2015 Discover Thainess" campaign will emphasise the distinctive Thainess of 22 destinations — 10 major tourist attractions and 12 secondary ones, all renowned for their unique history, culture and lifestyle, Ms Kobkarn added.