Russians give Pattaya a big miss

The sharp devaluation of Russia's rouble has dealt a big blow to Thai tourism with falling reservations from Russian tourists during this high season. 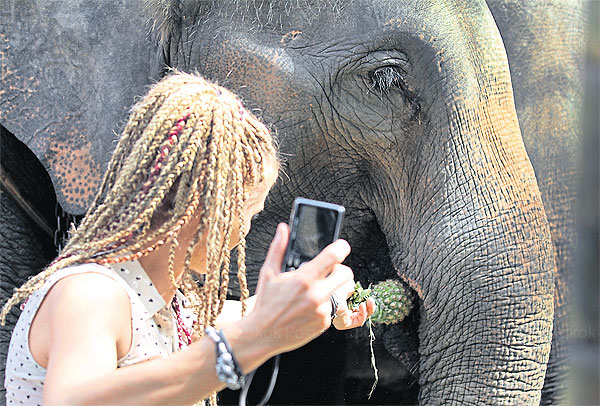 A foreign tourist feeds a pineapple to an elephant at an elephant feeding event held recently in Surin province. Travellers from Russia are on the decline since the sharp depreciation in the rouble. PATTANAPONG HIRUNARD

Sanpetch Suppabawonsathien, president of the Thai Hotels Association, said the Russian tourist market in Pattaya was slumping for the first time in 12 years.

"Hotel room reservations from the Russian market have already dropped by 70% for this high season," he said.

Pattaya hoteliers are facing a difficult time due to pressure from travel agents to cut surcharges and gala dinners from tour programmes in the peak season and to sell special packages for Russian tourists.

With the impact from the weak rouble, the number of Russian visitors to Pattaya should drop by more than 50% this year, Mr Sanpetch said.

Pattaya hoteliers need to shift their focus to the Asian market, especially China, he said. But most Chinese travellers prefer to stay in two-star hotels rather than luxury ones.

Chinese visitors have overtaken Russians as the biggest market for Pattaya.

Some Pattaya hotels are operating at only 30% capacity in high season.

Sisdivachr Cheewarattanaporn, president of the Association of Thai Travel Agents (ATTA), said the association is very worried and closely monitoring the economic crisis in Russia. Bookings from Russians remain sluggish even in high season.

Russian arrivals to Thailand through ATTA's member tour agents are estimated to average about 80,000 a month but negative factors, especially the weak rouble, will lower that number to only 50,000.

Mr Sisdivachr said arrivals from Russia to Thailand through its member tour agents would drop by at least 30% for the whole year. As of Nov 30, arrivals through ATTA members had declined by 26% to 410,325.

The economic downturn in Russia has affected demand for overseas holidays. While Thai travel agents mainly rely on the Russian market, the big players have moved to promote other destinations instead of Thailand.

In the first 10 months, arrivals from Russia to Thailand decreased by only 0.03% to 1.262 million visitors. The negative trend of the Russian tourist market started in May and sharply worsened in October as the economic crisis deepened.

The Department of Tourism recently revealed that arrivals from Russia continued to drop in November, falling by 21% to 181,888 visitors.

At present, the Russian market is the third-biggest market for Thai tourism.

The Tourism Authority of Thailand projects that arrivals from Russia will be a maximum of 1.3 million visitors this year and 1.5 million next year.