CIMB Thai Bank (CIMBT) has sharply slashed its 2015 growth forecast for Thailand's economy to 3.3% in a sign that Southeast Asia's second-largest economy could expand by less than 4% for a third straight year. 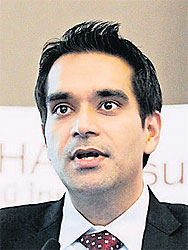 The research house projected 2015 economic growth of 4.5% in September.

Thailand's GDP grew moderately by 2.9% in 2013 and is likely to expand by less than 1% this year due largely to political turmoil, tepid exports, weak domestic consumption and private investment.

"Although public investment is expected to be the main driver of economic growth next year, delays in the government's budget disbursement for investment [projects] would offset private investment incentives, so an acceleration in investments is projected to be lower than previously estimated," Mr Amonthep said.

The government's concrete move to disburse its investment budget would enhance the private sector's investment confidence in the long run, he said.

"But the private sector should not solely wait for the government' confidence-boosting move since financial liquidity remains adequate for now, but it could be tightened given an increase in interest rates next year, while capital outflows could occur based on the US Federal Reserve's rate hike decision," said Mr Amonthep.

The National Social and Economic Development Board forecasts economic growth next year of 3.5% to 4.5%, while the Bank of Thailand has lowered its 4.8% growth projection but an official announcement will be made next Friday.

An uplifting export recovery is not foreseen next year because the global economic recovery has not recorded a decent rebound and a slump in oil prices has contributed to reduced revenue for petroleum-exporting countries, he said.

Falling oil prices also influence prices of agricultural products such as rubber, palm and sugar cane, which will take a toll on Thai agricultural exports.

CIMBT projects exports to grow by 3.6% next year, down from 6.1% predicted in September.

Thailand's economy is expected to grow by 0.6% this year, down from an earlier projection of 1.5% made in September, according to CIMBT.

The agency warned of a rating risk "if political and institutional stability deteriorates beyond what we have observed in the past seven years".

"We may also lower the ratings if the country's fiscal or economic indicators weaken significantly," it said.

"On the other hand, if leaders across Thailand's political spectrum achieve greater harmony, we believe economic growth prospects would improve."