PTT Exploration and Production Plc (PTTEP), the sole SET-listed petroleum explorer, has set a five-year investment budget of US$24.3 billion.

President and chief executive Tevin Vongvanich said its expenditure and operating expenditure for the development of production and exploration projects through the end of 2019 would total $24.3 billion compared with $27.28 billion for the previous five-year investment plan ending in 2018. 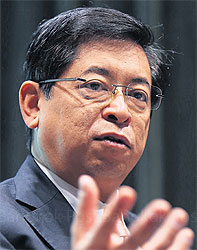 The company considers the budget to be in line with the current situation of global oil prices, which have slumped by more than 50% over the past six months in the market's biggest fall for many years.

"Our latest investment plan has been adjusted in order to reflect the lower trend of global oil prices," Mr Tevin said.

For 2015, Mr Tevin said 52% of the budget allotted for the year will be spent on existing petroleum fields in Thailand including the Arthit project, S1, Bongkot, Contract IV and MTJDA with the aim of maintaining their capacity.

About 20% will go to projects elsewhere in Southeast Asia, focusing mostly on the Zawtika petroleum block in Myanmar including project development at Myanmar M III, exploration at Myanmar PSCG, the EP II project, Moge III, MD-7 and MD-8.

About 17% of capital expenditure next year will finance exploration and production in Australia, the Americas and the Middle East.

The remaining 11% of capital expenditure will fund the development of back-up offices and related business.

PTTEP shares closed yesterday on the SET at 118 baht, down four baht, in trade worth 860 million baht.