Internet service providers (ISPs) have been "authorised" to monitor and block web pages threatening national security or containing lese majeste content as they see fit, without having to seek prior approval from regulators. 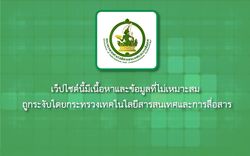 More of this green screen is possible now that ISPs have the power to block web pages on their own.

The new measure was approved at a joint meeting between the National Broadcasting and Telecommunications Commission (NBTC), large internet service providers (ISPs) and the police's Special Branch on Monday.

NBTC secretary general Takorn Tantasith said in cases where the ISPs are uncertain whether a page should be blocked, they may consult the NBTC's five designated staff.

After an ISP blocks a page, it is to report to the NBTC and the Information and Communication Technology Ministry without delay.

Under previous law and regulations, police had to ask a court for permission to block an internet site or a web page. It is not clear who or what agency has authorised the ad hoc, freelance censorship.

The measure will apply to all types of content and not just Facebook, said Mr Takorn, adding it covers both regular web pages and social-media posts or messages.

This does not mean, however, that the NBTC will stop monitoring the content, he said.

The Special Branch will be responsible for stringently prosecuting offenders.

"We'd like to ask everyone to check carefully before posting or sharing anything on the internet. They can also report offensive content by sending email to report.nbtc@gmail.com," he said.

The move is seen in response to a lack of cooperation by foreign media companies in removing content the Thai government finds offensive.

According to the latest Google Transparency Report from July to December 2013, the US media giant did not remove any content requested by Bangkok.

Among the requests during the six-month period were for 298 YouTube videos by the ICT Ministry which Google turned down because "the request was for global removal".

Interestingly, an MP asked for a removal of a search result linking to a news article defaming him. The media search engine did not comply for "reasons of public interest".

Naver Corp, the South Korean operator of Line messaging service, last week denied its network was being monitored by the ICT Ministry for offensive messages.

"Since Line encrypts all messages, it is technically impossible to monitor Line's conversations by any third party.

"Line users' privacy is our top priority, hence we do not allow a third party to monitor Line messages," it said in a statement. It acted in response to the ICT minister's claim the ministry could identify the sender of each of the 40 million messages Thais send over the Line network each day.