Thai companies splurge on stakes and acquisitions, aiming to gain an edge over regional rivals when the AEC arrives and the global economy recovers, write Post reporters

Amid a stagnant economy, the past 12 months saw Thai companies go on a buying spree of local and Western business rivals, aiming to be at the forefront when the global economy picks up and the Asean Economic Community arrives at the end of 2015.

The Bangkok Post recaps the significant deals of 2014. They include the acquisition of California-based Bumble Bee Seafoods by Thai Union Frozen Products Plc, the 44-billion-baht purchase of a 22.53% stake in Hemaraj Land and Development by warehouse developer WHA Corporation Plc, and a 28.6-billion-baht stake in True Corporation obtained by China Mobile International. Several deals were also made among major property developers. 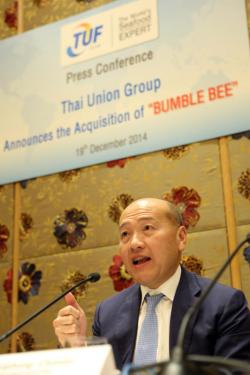 Thai Union Frozen Products Plc (TUF) was crowned the "king of tuna" in 2010 after it took over France's MW Brands in a deal worth US$883 million.

The title gained new resonance when, a week before Christmas, the company announced its biggest deal ever: the acquisition of California-based Bumble Bee Seafoods for $1.5 billion.

If the deal is completed, TUF will become a leader in the US canned tuna business, with market share rising from 28% to 47%, according to Asia Plus analysts.

The SET-listed TUF has been busy with mergers and acquisitions (M&A) in recent years, but especially in 2014 as it pursued a strategy to become a global company.

Before the Bumble Bee deal, TUF bought Norway's King Oscar, a maker of sardines, for $80 million and France's Meralliance, a maker of smoked salmon, for $220 million.

The transactions were completed in the fourth quarter of 2014. Both acquisitions have allowed TUF to enter premium markets in the US and Europe.

The Bumble Bee deal is expected to be completed in the second half of 2015, pending approval from US antitrust authorities and other closing conditions.

TUF president and chief executive Thiraphong Chansiri said the deals would help TUF reach its revenue targets of $5 billion in 2015 and $8 billion in 2020.

Those goals are a far cry from the $1 million in revenue made by TUF during its first year in 1977.

TUF founder Kraisorn Chansiri said TUF began to penetrate foreign markets in 1997 with its takeover of Chicken of the Sea, the third-biggest canned tuna brand in the US.

With the advent of the Asean Economic Community (AEC) in late 2015, Thai companies have rushed to flex their investment muscle and gain an edge over regional peers. M&A is the most expedient method for vertical and horizontal deals. 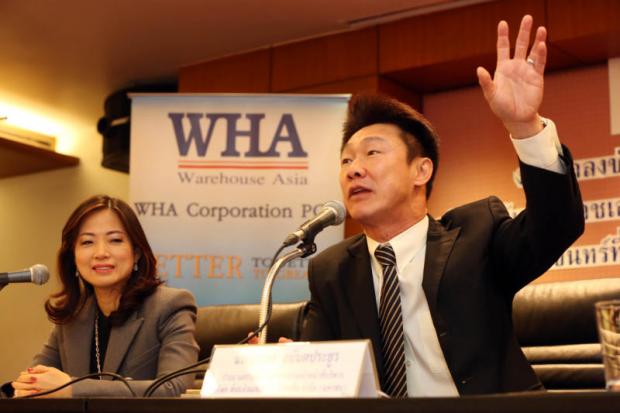 Warehouse developer WHA Corporation Plc in November entered a surprise agreement to purchase a 22.53% stake in Hemaraj Land and Development from a group led by former steel tycoon Sawasdi Horrungruang.

The deal will only go through when at least 50% of Hemaraj's shares are tendered to WHA, which is expected to launch a tender offer for 25 business days (March 6 to April 10).

The deal, to be valued at 44 billion baht if all the Hemaraj shares are bought, will create a fully integrated warehouse developer that sells land at industrial estates. WHA's customer base will become more diversified — and the income stream more stable — once the merger is completed.

Hemaraj runs eight industrial zones, mostly in the eastern provinces of Rayong and Chonburi, and caters to big manufacturers such as car makers. It also holds a sizeable stake in five power generating plants and provides water utilities and treatment to clients at its industrial estates.

WHA is a built-to-suit distribution centre, warehouse and factory developer. Most of its customers are in manufacturing and transport.

WHA will finance the acquisition by raising up to 8.8 billion baht through a rights issue and securing the remaining 35.5 billion via borrowing. Siam Commercial Bank is WHA's financial adviser and lender on the deal.

For the nine months through September, Hemaraj had revenue of 6.72 billion baht and a net profit of 2.54 billion, while WHA's revenue and net profit reached 481.05 million and 64.95 million.

The acquiring of a 28.6-billion-baht stake in True Corporation by China Mobile International (CMI) was a key deal that could mark a change in the local telecom industry's competitive landscape.

The move is expected to create an important competitive advantage for True, and it shows the increasing confidence of international investors in the Thai telecom market. 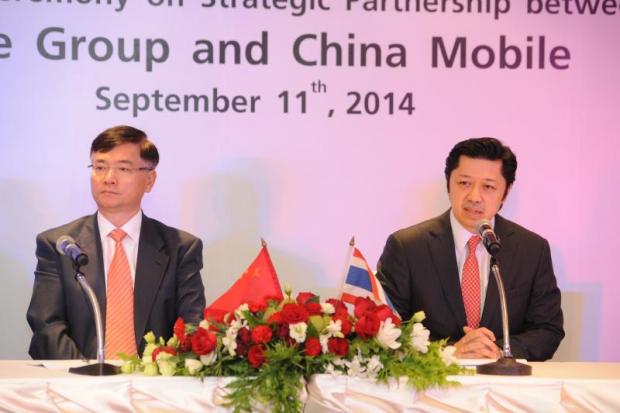 The proceeds from the deal will help True improve its debt position, reducing its load from 92 billion baht to 40 billion.

True Move, the mobile flagship, is the only independent mobile operator in Thailand and has been seeking a foreign partnership for years to help fund its network expansion. 4G technology is on the doorstep, and True hopes China Mobile will pitch in with funding.

The agreement paves the way for 4G technology transfer, joint procurement of handsets and networks, and a shared strategy to fight the threat of "over-the-top providers" (offering audio, video and internet service).

As the world's biggest mobile communications firm, with a subscriber base of 800 million people, CMI represents an important strategic partner. The tie-up gives CMI a global presence, while Thailand can serve as a solid base for Asean entry into telecommunications and other sectors.

Chief executive Suphachai Chearavanont announced that True would post a profit in the fourth quarter of 2014, while adding that the group would remain profitable because of "accelerated 2G loss accounting" after the end of its concession.

Ichitan Group Plc, a leading green tea maker, announced last May that it would pay 240 million baht for the Bireley's manufacturing formula and trademark from Sunny Herb International Beverage Co.

The move is aimed at expanding Ichitan's product portfolio to include soft drinks.

The Bireley's brand is considered "a vintage car left in a garage waiting for a new driver". Ichitan hopes to revive the dying brand.

The California-born orange soft drink has been dormant in the Thai market for several years, but its brand value remains strong. More importantly, the taste is deemed good enough to support marketing to rebuild the brand.

Tan Passakornnatee, founder and president of Ichitan Group, said he got a good deal for Bireley's, noting the brand's long history worldwide and 66 years in Thailand.

In addition to Thailand, the purchase of the Bireley's formula and trademark will cover Cambodia, South Korea, Canada, Myanmar, the Philippines, Malaysia, Singapore, the US, China, India, Hong Kong, Bangladesh, Indonesia, Taiwan and Vietnam.

In Japan, Asahi has the rights to bottle and sell Bireley's.

Ichitan sought Bireley's because it wanted a shortcut to extending its product portfolio from ready-to-drink green tea, which faces fierce competition in a market with several big players.

Ichitan planned to begin marketing Bireley's in the fourth quarter of 2014. It will make two flavours of Bireley's, orange and grape, at its Rojana factory or through a third party. The company expects sales of 200 million baht from Bireley's during the first few months.

The Thai property market saw a series of mergers and acquisitions in 2014 involving small and medium-sized property developers, as well as strategic alliances among larger players as they strove to keep their competitive edge.

Some of the top-ranked property developers also formed strategic alliances to strengthen their position in high-rise housing and bring intensified competition to the condominium segment.

Examples of such alliances include a partnership between Sansiri Plc and mass transit operator BTS Group Holdings Plc to build condos near urban rail stations, and a condo tie-up with AP (Thailand) and Japan's Mitsubishi Estate Group.

In 2015, the continuing economic slowdown will probably force developers to seek joint ventures and other deals in order to survive.

Thailand should become even more attractive when Asean becomes a single market in late 2015.

The acquisitions, which diversify PF's portfolio across a variety of businesses such as horizontal properties, condos, rental offices and hotels, enable PF to leap into the top five of Thailand's real estate industry in terms of assets and revenue, up from No.8 by assets and No.9 by revenue.

After the acquisitions, PF's total assets rise to 45.2 billion baht from 30.7 billion, while revenue is estimated at 22.2 billion baht, up from 16 billion.

The company also plans to develop the Hyatt Regency Bangkok with 273 rooms on Sukhumvit Soi 11.

Hyde Sukhumvit is worth 5 billion baht. Grande Asset is developing a Hyde 2 with 450 units worth 3 billion baht on Sukhumvit Soi 11.

Rasa Property later increased its registered capital to 4.71 billion baht from 550 million and changed its name to Singha Estate Plc, with Singha Property Management and Mr Santi holding 56.97% and 31.36% stakes.

The company's biggest project will be the Singha Complex, a mixed-use development on 11 rai at the corner of Asok and Phetchaburi roads, the former site of the Japanese embassy.

Japan sold the plot to Singha Property four years ago for 520,000 baht a square wah, after which time it was transferred to Singha Estate.

Singha's plans for the site include hotel, retail, office and residential projects worth a combined 6 billion baht in a construction area of 144,250 square metres. Construction will start in the second quarter of 2015 for completion in late 2018.

On Asok Road, Singha has a two-rai plot opposite GMM Grammy Place where a 39-storey condominium with 329 units worth 2.85 billion baht will finish construction by the end of 2015.

The first quarter of 2015 will see the launch of a low-rise condo project worth 1.75 billion baht on 13.5 rai of Ram Intra Road, comprising five seven-storey buildings and a combined 686 units.

Finally, Singha plans a high-end single-house project worth 2.24 billion baht on 30.5 rai of Pradit Manutham Road in the Nuan Chan area, featuring 16 units of one rai each.

Unsold properties developed under Rasa include 10 units worth 49.9 million baht at Intro Condominium on Pradiphat Road, 28 townhouses worth 84 million baht at Maxx Ville on Phahon Yothin Soi 73, and 3,500 sq m of rentable space at The Lighthouse on Charoen Nakhon Road.

Singha's move into property is in line with management's policy of doubling the sales contribution from non-alcohol business to 30%.

Combined with existing holdings of SMJC Real Estate Co, part of the TCC Group owned by Mr Charoen, the family's ownership in KLand increased to 66.66%.

After acquiring KLand, Golden Land will continue its focus on commercial property and residential development.

At year-end 2014, it expected 2.38 billion baht in revenue from housing sales and 1.26 billion baht from rental business.