The government's attempt to transform Thailand into a digital economy has moved a pace ahead, with eight draft bills related to the digital economy winning cabinet approval on Tuesday. 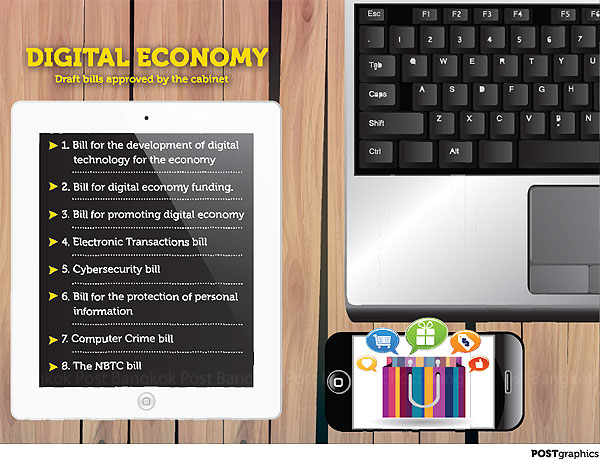 The bills aim to restructure the Information and Communication Technology Ministry and related agencies to facilitate the digital economy development plan.

A significant change under the raft of proposed bills is that the National Broadcasting and Telecommunications Commission (NBTC) will come under the supervision of the Digital Economy Policy Committee and allocate 50% of its licence fees to the digital economy development fund.

Prime Minister Prayut Chan-o-cha said that the government was strongly committed to implementing the digital economy policy this year in line with improvements to various state agencies including the ICT Ministry, ToT Plc, CAT Telecom Plc and the NBTC.

"The development of the digital economy must be based on benefits to the nation, while  the NBTC also needs to be improved to make it generate income."

Earlier on Dec 16, the cabinet endorsed the draft bill for a committee charged with setting policies and guidelines for the country's digital economy scheme.

The cabinet has also approved a draft bill to improve ministries and reduce duplication among state agencies.

As part of the changes, the ICT Ministry will become the Digital Economy and Society Ministry.

Surangkana Wayuparb, director of the Electronic Transactions Development Agency (ETDA), said the eight bills will be passed to the National Legislative Assembly by April to process into law.

The ETDA is responsible for creating and delivering the government's digital economy policy pertaining to soft infrastructure — one of the six pillars of the draft action plan for digital economic development.

The Computer Crime bill will deal with intellectual property and copyright issues as well as block websites related to piracy.

The bill for promoting the digital economy will enable the government to set up a digital economy promotion agency in order to advance the use of digital technology for economic and social development.

The Cybersecurity bill will allow the state to establish a national cybersecurity centre to tackle cyberthreats.

Under the NBTC bill, the regulator will be downgraded to only overseeing the allocation of spectra for public and industrial benefits and governing competition in the telecoms and broadcasting industries.

The government will take over managing auction money and licence fees that are currently handled by the NBTC, said Ms Surangkana.