The Social Security Office, which manages 1.2 trillion baht in pension contributions from local workers, started boosting holdings of Thai shares last month after correctly predicting in October the market would retreat. The fund, which had about 77% of assets in local government bonds as of Sept 30, is asking its board to approve a greater shift toward equity and alternative assets, said Win Phromphaet, the SSO's head of investments.

Thailand's benchmark equity index fell in December by the most in 16 months as oil's retreat dragged down energy companies, while yields on government bonds sank to the lowest level in five years. The slump in shares has left valuations trading near the cheapest since August versus developing-nation peers, according to data compiled by Bloomberg.

"The SSO has an urgent need to boost investment in other assets than local bonds, whose returns keep falling," Mr Win said in a telephone interview. "The current correction in Thai equities makes them more attractive."

The yield on five-year Thai government debt slid to 2.28% on Jan 5, the lowest level since May 2009, according to Thai Bond Market Association data. The country's inflation slowed to 0.6% in December, the least since Oct. 2009, as oil prices fell, the commerce ministry said on Jan 5.

The SET Index slumped 6% in December, its worst monthly fall since August 2013. The decline was led by PTT Pcl, Thailand's biggest company by market value, and its unit PTT Exploration & Production Pcl. Foreign investors sold a net $1.1 billion of Thai stocks in 2014, including an outflow of $843 million in December, according to a data compiled by Bloomberg. 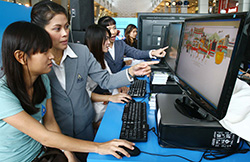 A Social Security Office employee shows how to use the agency’s website to a customer. The pension fund is now seeking approval to reduce soverign debt holdings to buy more local shares. (Bangkok Post photo)

Mr Win, whose fund has about 100 billion baht invested in Thai stocks, said last month's selloff was steeper than even he anticipated and created a good opportunity to buy into some shares that had dropped too much. The SET Index is attractive below the 1,500 level, he said.

The stock measure is valued at 13.5 times estimated 12-month earnings, versus 10.8 times for the MSCI Emerging Markets Index.

Thailand's Government Pension Fund, which gets contributions from state employees, was also a buyer of shares during last month's rout, though the fund isn't rushing to purchase stocks this year, said Chief Investment Officer Yingyong Nilasena.

"Thai shares are very volatile because of the movement in oil prices," Mr Yingyong said. "We're assessing the situation to see the impact of lower oil prices on the Thai economy and stock market."

The SET Index's 30-day historical volatility was at 16.66 yesterday, after jumping to 16.8 on Dec 25, the highest level since February.

SSO's Mr Win says he's also being selective amid increased volatility. He has an underweight position in banks on concern they'll be impacted by slower economic growth, and in energy shares on the drag from lower oil prices.

The fund has overweight holdings on commerce, telecommunication and health-care companies as they're less affected by energy prices and slower global growth.

"Low oil prices will bolster the domestic consumption as consumers can save fuel costs for other purchases," Mr Win said. "Commerce and telecom sectors will benefit from a rebound in domestic spending."