Tapioca pledging has emerged as another failed scheme of the previous government, with losses estimated at 3.5 billion baht. 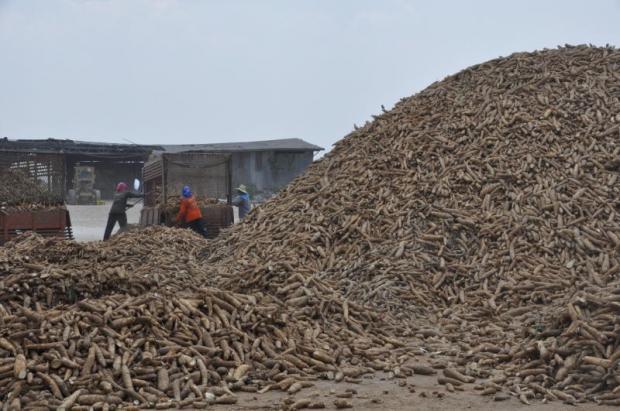 Workers load cassava in Nakhon Ratchasima. A DSI probe has revealed that 13,000 tonnes of tapioca pellets have disappeared from a warehouse. PRASIT TUNGPRASERT

Authorities have already filed 85 lawsuits against alleged offenders who include not only warehouse owners but also state officials, he said.

A recent probe by the Department of Special Investigation (DSI) revealed that 13,000 tonnes of tapioca pellets delivered by cassava farmers under the previous government's pledging policies had disappeared from a warehouse in Ayutthaya province.

Kasetphuetpol was granted a concession by the PWO to take part in the government's tapioca-pledging scheme for the 2011-12 crop. The company rented the warehouse in Ayutthaya to store 13,000 tonnes of pledged tapioca.

Upon examining the warehouse, DSI officials found it empty with no sign of the tapioca.

The previous government set aside 44 billion baht to subsidise cassava for the 2012-13 crop, but it spent just 27.83 billion baht to buy 10 million tonnes of cassava root during that season.

For the following 2013-14 season, the Yingluck Shinawatra administration first approved 45 billion baht to buy about 15 million tonnes. In May 2013, it scaled back to 30.5 billion baht for 10 million tonnes after the scheme drew lukewarm interest from farmers and a drought threatened to cut production.

PWO chairwoman Jintana Chaiyawonnagal said the group had asked the police to take legal action against the alleged offenders. The government is committed to speeding up sales of existing tapioca stocks, with 180,000 tonnes winning approval for sale last week, she added.

The Foreign Trade Department is preparing terms of reference for the planned tapioca sales and is expected to call a general auction next month.

Seree Denworalak, an adviser to the Thai Tapioca Trade Association, said Kasetphuetpol Intertrade Co was not an association member.