Thailand's 11 SET-listed banks reported solid growth of consolidated net profit for 2014 thanks to higher revenue from interest and non-interest income. 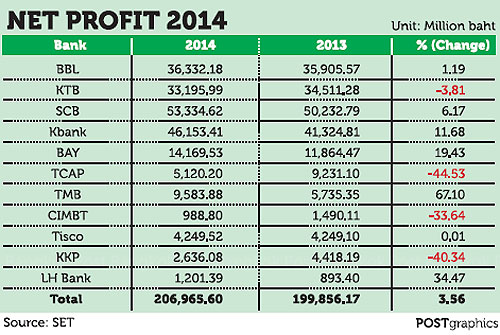 KTB posted 2014 net profit of 33.2 billion baht, down mainly because of its risk management policy as it set up additional loan loss reserves to prepare for the slower economy. It increased its monthly normalised provision for doubtful accounts from the second quarter of 2014 to 700 million baht, up from 500 million.

CIMBT's gross NPLs stood at 6.4 billion baht, 3.3% of total outstanding loans, up from 2.5% in 2013. Bad debts rose because of the economic downturn that hurt borrowers' repayment ability and the increased borrowing amount of corporate accounts and retail segments.

As of December 2014, the bank's total loan loss reserves were 6 billion baht, an excess of 2.2 billion above the central bank's reserve requirement.

Maybank also projects a weak recovery would create a higher rate of NPLs, especially from the retail sector and small businesses.