The chief of PTTEP offers a candid analysis of how the company will adjust given extremely low oil prices and an uncertain economy.

The International Monetary Fund cut its global growth projection for 2015, the European Central Bank started a quantitative easing programme and oil prices have been in a free fall for over six months. 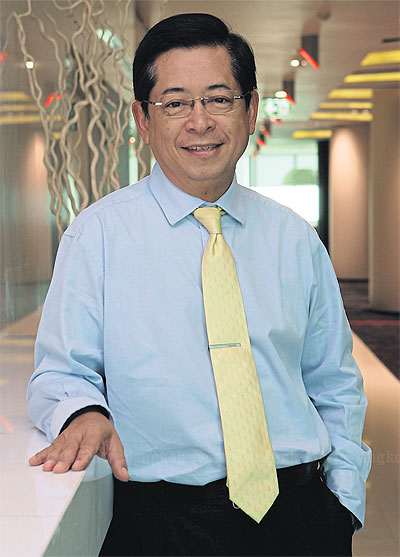 There are challenges as well as opportunities for PTTEP during this period of cheap oil prices, says Tevin Vongvanich. APICHIT JINAKUL

As many anticipate petroleum drillers will suffer, Tevin Vongvanich, the head of Thailand's first and only SET-listed petroleum explorer PTT Exploration and Production, shares his insight on how to survive the hard times.

How far can the price drop?

We no longer try to predict the price. The price movements have been insane. We stopped monitoring the oil analysis as some projections were as low as US$30 a barrel while other analysts foresee a strong rebound to $200.

The difference is too great so it is useless to try to make predictions. It is better to try and cope with the impact by setting scenarios instead.

The company anticipated three scenarios: prices moving in a U shape, an L shape and a swoosh shape.

The U shape and swoosh shape are better for the company, because if the price picks up slowly as with the L shape, it is uncertain when a full rebound will occur.

I used to think $80 was an appropriate price, but it is not realistic now.

Producers cannot survive if the price stays at $50 a barrel. Supply will decrease as companies go bankrupt, especially those accessing unconventional resources such as shale oil, shale gas, deep-sea oil and oil sands that have high production costs. This lower supply should help drive up prices eventually.

What has been the impact of the oil price plunge on PTTEP ?

The immediate impact is asset value adjustment in Australia's Montara project and the oil sands project to reflect the actual value of its oil reserves, which affects the results of 2014 operations.

Another change will be the company's business plan, as it must be based on the commercial viability of future projects.

The company recently cut its five-year capital and operational expenditure budget to $24.3 billion to reflect its assumption that oil prices would range from $55 to $70, down from $27 billion.

Around 70% of the total budget or $16.8 billion was the fixed budget, with the rest the provisional budget, which means it could be reviewed as to whether it is essential.

It would seem another revision of the budget to reflect the most updated oil price is essential, but we don't need to rush at this moment, as the first committed investment project is scheduled to start by the last quarter of this year.

This year's production plan is unchanged with a volume growth target of 6% to 343,000 barrels of oil equivalent per day, as PTTEP can handle a base price of $30 a barrel even if it crimps the margin.

We thoroughly inspected each of our operating fields. Every field is fine at $30 a barrel. The current oil price is $45 and there are a lot of costly petroleum resources that are unlikely to survive.

The 2015 budget set aside for existing petroleum fields in Thailand includes the Arthit project, S1, Bongkot, Contract IV and MTJDA.

Some 20% of the budget will go to projects elsewhere in Southeast Asia, focusing mostly on the Zawtika petroleum block in Myanmar, which started production last year.

Mozambique's Rovuma Offshore Area One project, which is due for a final investment decision (FID) by the end of this year, will be the first capital-intensive project in 2015. Fortunately, we have until the end of the year to monitor oil price trends before making a major decision.

However, I'm still quite confident Rovuma will proceed as planned because all factors indicate its readiness, including production techniques, an environmental impact study, and the Mozambique government imposing a regulation guaranteeing the investment agreement conditions are unchanged until the project ends. The number of potential buyers is high enough to make our operation commercially viable.

Some 60% of the 10 million tonnes of the Rovuma field's natural gas output have found potential buyers. Project financing is also likely to be ready to start by that time frame.

We only need to work on the purchasing contract and financing deal before the FID.

We plan to finance the project with a loan of around two-thirds of total investment. Rovuma will require $1.5 billion investment from PTTEP, around $1 billion out of which will be equity and the remaining $500 million borrowing.

Apart from Rovuma, the fate of other overseas projects depends more on oil prices. PTTEP's Algeria Hasse Bir Rekaiz and Bir Seba fields will find production difficult to continue given a sales price of $40-50. But we still have until next year if we will start project sanctions in 2019.

Other big projects include Australia's Cash Maple floating liquefied natural gas, the $2-billion Mariana oil sands project in Canada and Myanmar M III. The oil sands project is most likely to be delayed or frozen as the cost of oil pumping is as high as $60 a barrel, far lower than the Western Canadian Select price of $30 a barrel.

These projects are still in the development process and will require a few years until the FID period.

In times of crisis, what opportunities are there for the company?

I'm delighted to share with you we still have good news. Since we are flush with cash on hand of at least $3 billion because of our fund mobilisation programmes in recent years, in three years we will not need any new funding.

We are keen to buy the shale oil and shale gas companies that were successful in recent years, challenging the oil-exporting countries, and now they are closed down because their costs are over $40 a barrel.

We are also looking to acquire petroleum fields in neighbouring countries and Asia-Pacific this year. We hope to see competitive offers.

What is the main challenge for the company?

The main challenge is how to improve cost efficiency.

Since no one can predict the trends, the most effective measure to survive in business is to control costs. The one who does best in cost control is the winner.

PTTEP introduced a cost-reduction programme last year resulting in $80 million in cost savings. We set ambitious target to cut costs by $560 million more over five years starting this year by rearranging operations, cutting all unnecessary expenses, and asking to revise contracts with service companies and contractors.

We are proud of our new platform designs, they have all essential functions but we cut the luxurious furniture. We can save a lot.

How do current oil prices affect the overall industry?

There will be a lot more merger and acquisition activities in the industry, mostly buyouts, not just acquiring a stake. The shale oil and shale gas exploration and production companies will close or their price will sharply fall. So it will be an attractive time for players with money to spend.

Industry players will have to change their mindset from booming energy conglomerates to becoming humble in order to survive.

The past five years oil prices were steady at $100 and the return on investment was about 10-15%. Now with the price below $50, you can imagine how hard it will be to make a profit.

Renewable energies will have fewer opportunities to develop because their costs are normally a lot higher than fossil fuels, so the public will be discouraged from using green fuels.

The biggest concern about the oil price decline is for the service firms, contractors and lenders who are inevitably affected by debt defaults of the financially ailing oil companies.