The price of oil has declined drastically from $115 a barrel in June 2014 to below $50 recently. The decline can be attributed to weak global demand coupled with Opec’s decision to maintain output levels at 30 million barrels per day. 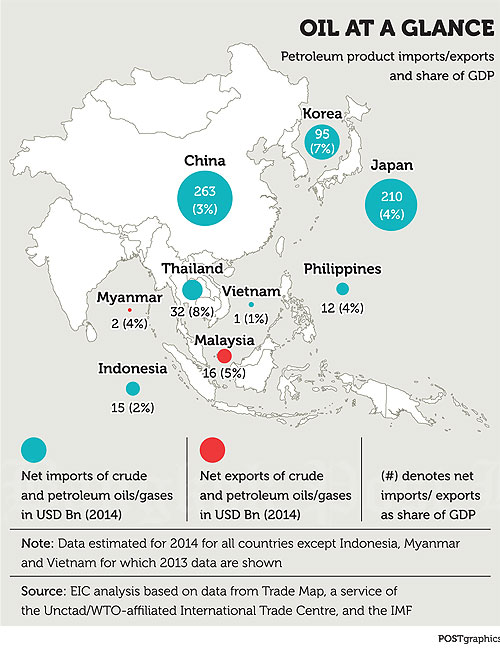 Net oil importers, such as China and Japan, should benefit from lower oil prices as a result of cheaper input and fuel costs, and increased consumption as consumers have more disposable income. On the other hand, net oil exporters, including countries in the Middle East and Russia, should be negatively affected as their economies are heavily dependent on oil revenues.

Thailand is an oil-importing nation with net oil imports amounting to $32 billion in 2014, according to data from Trade Map, a service of the Unctad/WTO-affiliated International Trade Centre. The low oil price environment is slated to have an overall positive impact on the Thai economy. Industries such as wholesale/retail, food and beverages, and electronics should benefit from increased consumption, while the logistics sector will gain from lower fuel prices.

On the other hand, some sectors will be adversely affected. For example, the oil exploration and production (E&P) sector will suffer from lower prices and revenues, the hotel industry will experience lower revenues from fewer Russian tourists, and the automobile industry will see decreased demand from the Middle East.

As well, the agricultural commodities sector should also feel a squeeze as para rubber and sugar prices are expected to fall — the former the result of lower synthetic rubber prices, while the latter is due to increased production in Brazil amid falling ethanol prices.

In Asia, the country likely to benefit the most from lower oil prices is Japan. Japan is a major importer of oil and oil-related products with imports valued at $210 billion in 2014 —roughly equivalent to 4% of the country’s GDP. Japan’s manufacturing sector is set to experience a significant upside from lower raw material and electricity costs. This includes companies in the steel, tyres, glass and paper sectors. For example, electricity costs account for 5-20% of sales in the steel sector so significant gains in profitability are expected.

However, the outlook is not all rosy for Japan as some sectors will be negatively affected by lower oil prices. A quarter of Japan’s automobile exports are destined for oil and commodity-exporting nations — including the United Arab Emirates, Russia and Australia — which are now experiencing a slowdown in demand. The impact will be somewhat tempered by stronger demand from the United States which accounts for almost 40% of Japan’s auto exports.

If we take a look at Asean nations, we see that Malaysia and Indonesia stand to lose from the low oil price environment. Malaysia’s economy relies heavily on energy and fuel, with oil imports valued at $16 billion in 2014. Crude oil and LNG exports account for about 8% of the country’s GDP. The fall in oil prices is expected to have a negative impact on Malaysia’s current account balance and currency.

The Malaysian government is also very dependent on oil-related revenues with dividends from Petronas — the state-owned oil and gas firm, royalties and taxes accounting for 30% of government revenue.

In addition, Malaysia has sizable oil-substitute industries, i.e. the palm oil and para rubber industries, with the latter accounting for almost 30% of total world production. Lower palm oil and rubber prices are expected to lead to weak domestic demand.

Though Indonesia is a net oil importer, it is heavily reliant on the export of commodities such as coal, palm oil and rubber which make up about 60% of the country’s GDP. As with oil, commodities prices are being pushed down by increasing supply amid a weakening global economy. The decline in income from commodities will have an adverse effect on Indonesia’s current account and consumption levels, especially in rural areas where palm oil and rubber farming communities are located.

Perhaps the only silver lining is that for coal, Indonesia’s largest export product, the impact of lower prices on profits should be marginal as 20% of operating costs are fuel related and hence will be drastically reduced.

Weak demand in Malaysia and Indonesia is expected to adversely affect Thailand’s exports to these countries. The automotive, machinery, electronics and plastic industries are most at-risk as they account for Thailand’s top exports to Malaysia and Indonesia, with exports valued at $12 billion in 2014. Thai firms with large exposure to these markets should diversity their export portfolio especially into net oil importing nations which are expected experience strong growth in domestic consumption.

KUALA LUMPUR: Malaysia is reviewing its government subsidies programme, aiming to direct money toward low-income groups, Prime Minister Anwar Ibrahim said on Sunday, prioritising the rising cost of living as he takes office at a time of slowing growth.