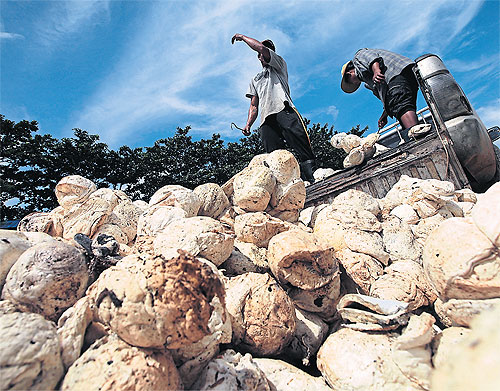 Workers offload scrap rubber at a processing plant in the southern province of Surat Thani. With rubber prices declining, growers are opting to sell scrap rubber instead of making sheets as a way of cutting production costs. PATIPAT JANTHONG

Somchai Jitsuchon, research director for inclusive development, said repairs of infrastructure such as weirs and water reservoirs could create jobs in the countryside.

"This would cause financial capital to circulate in the economic system and lead to long-term benefits such as improvements in farm production and irrigation," he said.

Mr Somchai said cash giveaways were an option to stimulate the economy but should be implemented only in times of severe recession.

They would be aimed at boosting consumer purchasing power, but cash handouts would inevitably be included to help farmers' ailing economic conditions, he said.

Domestic politics remains an important factor influencing the government's fiscal policy stance, as the incumbent administration has adopted pro-cyclical measures amid the economic slowdown to differentiate itself from the previous government's hefty budget deficit when economic conditions were not dismal, Mr Somchai said.

He said Thailand's economy could expand by 4% this year, given improved export growth and accelerated public investment on infrastructure development, which would subsequently draw in private investment incentives.

Domestic consumption is difficult to rely on for stimulating economic growth due to household debt and falling agricultural prices contributing to higher debt-servicing ability for rural consumers, Mr Somchai said.

Having a reasonable fiscal space including lower deficits and debts as well as prudential financial stability is vital in mitigating economic headwinds, as this would translate into higher growth potential.