Even though the Bank of Thailand believes the current policy rate would boost economic recovery this year, it has left the door open to a possible cut if the economy is slower than expected or unexpected effects emerge.

"Yes, the monetary policy has space for further easing if economic activities become subdued or are not in accordance with our forecast," central bank governor Prasarn Trairatvorakul said. 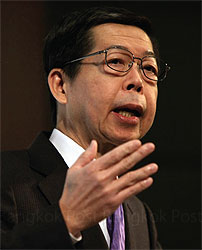 Mr Prasarn says the effect of a rate cut could be subdued.

But he said the effectiveness of easing monetary policy must be considered in terms of growth in the credit market and consumer spending relative to household indebtedness.

After Thailand's inflation turned into negative territory last month, economists predicted the central bank was likely to cut the rate in coming meetings, as inflation is likely to remain subdued for a while. They see economic risks skewing to the downside amid a divergence of global economic forces and possible delays in the government's spending on infrastructure projects.

In terms of effectiveness, the pass-through effects of cutting a low policy rate are less than those generated from a reduction in a high policy rate, said Mr Prasarn, adding that the current rate of 2% was considered relatively low.

He said it would take time for monetary policy effects to pass to the real sector, estimated at six to eight quarters, and policy is adopted based on long-term economic forecasts.

"Maintaining the policy rate at 2% is a confirmation to some sectors in the market that we're still adopting the same stance to sustain recovery momentum, as the recovery is expected to be moderate," Mr Prasarn said.

He said despite abundant liquidity in the financial system, commercial banks might not provide more loans even if the central bank makes a rate cut, as banks could be concerned with consumers' credit risk.

The central bank's Monetary Policy Committee has kept the one-day repurchase rate at 2% for seven straight meetings since a 25-basis-point cut last March, saying the rate was accommodative for an economic recovery and helped to contain risks associated with volatility in the global financial market.

Greater transparency in public procurement processes aimed at combating corruption may cause investment delays to a certain degree, but this would enhance the quality and benefit of investment, Mr Prasarn said, noting that public investment was expected to accelerate in the second half.

Domestic consumption is expected to pick up due to increased consumer purchasing power supported by tumbling oil prices and the effects from public spending and tourism growth, he said.

The central bank expects economic growth to reach 4% this year, driven mainly by public and private investment coupled with a recovery in domestic consumption. It will manage the foreign exchange rate to be in line with market forces to uphold the bank's credibility in foreign exchange management, as movement of the baht relative to the US dollar has not been extensive, Mr Prasarn said.

He said the local currency had gained against the euro, yen, Australian dollar and currencies of net oil exporters, but these countries are facing economic problems.

The European Central Bank's imminent bond-buying scheme of €1.14 trillion (42.4 trillion baht) has the business sector worried about baht appreciation, calling on the central bank to help them maintain competitiveness.