Akara must prove it's a clean mine
Business

Akara must prove it's a clean mine

Suspended gold mine firm Akara Resources Plc will have to prove its claims that its mining operation in Phichit province has not resulted in contaminating villagers' blood with heavy metals.

The Department of Primary Industries and Mines would consider lifting the suspension order if Akara Resources can prove its operations do not pose a health threat, the department director-general, Surapong Chiangthong, told a public forum on Wednesday in Phetchabun's Wang Pong district. 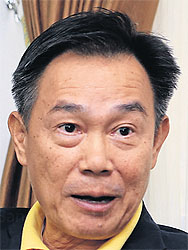 Surapong: Study must be transparent

Mr Surapong said the gold mine operator has sought the department's permission to resume mining after claiming it had improved operating procedures according to departmental instructions.

The EHIA results matched the results of tests conducted by the Central Institute of Forensic Science.

The Department of Primary Industries and Mines ordered the firm to send locals found with arsenic and manganese contamination for treatment.

It also told the firm to find out whether the contamination was a result of its mining operation.

The company was required to repeat urine and blood tests on the same 250 people and give the department the results in 30 days.

But Mr Surapong asked them to submit the list of people it says were sent for treatment to check whether they were the same people contaminated.

The department chief also told Akara Resources to submit the medical reports and blood test results of everyone the company claims was treated.

The company representatives yesterday submitted the list of 250 names.

But Mr Pakorn said the requested blood and urine test results would not be available until Saturday.

Mr Surapong also told Akara Resources must discover the true cause of the metal contamination. The study must be conducted in an open and transparent manner, he added.

Another condition imposed on the firm was that it must not talk to the press about the study results until they are final and formally submitted to prevent any misunderstandings.

The company has previously spoken to reporters about the results of an initial study by Mahidol University to back its claim the gold mine did not pose any health threats.

However, the university said the study had yet to be completed since more medical tests and examinations were being carried out.

Arom Khamjing, a villagers' representative, asked why the company's EHIA tended to focus on people aged five to 18.

Their parents were not aware the children had given urine and blood samples despite the fact that the company, under the law, should have sought their consent.

Cherdsak Atthakarun, from Akara Resources, admitted some of those asked to give samples in a second round were not in the same group tested last year because some had moved away and others had quit the test.

Suekanya Teerachartdamrong, a villager, said she was disappointed with the department's forum. She believes those who support the mine were organised to attend, which meant they outnumbered the complainant villagers.