Shopping malls, once a symbol of American retail, are becoming the thing of the past.

A February 4, 2015 photo shows a walkway leading to the courtyard of CityCenter DC, an intergrated development in Washington. AFP

Cierra Dorsey has happy memories of hanging out at the mall as a teenage girl, an adolescent rite of passage under threat in parts of the US as old-fashioned malls close their doors.

While high-end malls thrive, many others have been unable to keep up with changing shopping demands of American consumers, leading to obituaries in the US press with headlines such as "A dying breed: The American shopping mall," and "Shopping malls in crisis".

About 80% of the country's 1,200 malls are considered "healthy," which means store vacancy rates of 10% or less, according to CoStar Group data published in The New York Times.

That's down from 94% in 2006 and there is even a website dedicated to documenting what some are calling the death of the shopping centre, deadmalls.com, keeping tabs on the latest closures across the country.

"The first time my mom allowed me to go out by myself, it was in a mall," she said. She works as a saleswoman at a natural products shop in Fairfax, outside the US capital.

"I do have fond memories."

Most of America's malls were built in the 1950s and 1960s as a growing network of highways connected suburban homes to futuristic urban shopping centers.

When they were first introduced, outfitted with sleek glass, shiny tiles, escalators and indoor fountains, they were an antidote to outdated open-air strip malls.

"We must remember that the 1950s and 1960s were bathed in the desire for the modern, and in this light the newness of malls gave them a real edge over the old downtowns and open-air shopping centers," sociologist David Roelfs, from the University of Louisville, told AFP.

The mall also found a spot in popular culture. It was featured in several 1980s films, including Back to the Future and The Terminator.

The first mall in the United States — still open today — is the Southdale Center in Minnesota, which opened in 1956.

Victor Gruen, a pioneer for mall design, initially created them as a social gathering point. But the social dimension was quickly eclipsed.

"The mall quickly morphed into a more consumerist venue, where people went to be seen in the act of conspicuous consumption, more than to build relationships with their neighbors," said Mr Roelfs, who claims that no malls have been built in the US since 2009.

"They are becoming more entertainment complexes," he told AFP. 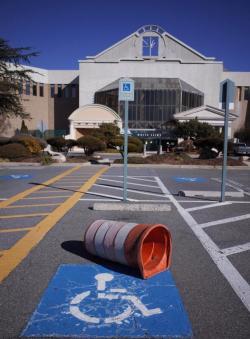 A traffic cone is seen in the parking lot in front of a closed entrance to White Flint Mall in Kensington, Maryland, on Feb 3, 2015. AFP

Developers are turning away from the traditional mall model and now opening "mixed-use" complexes, often outdoors, that feature shops, restaurants and even generous green spaces.

That is the idea behind CityCenterDC, a mix of commercial, residential and business complexes in the US capital.

David Dochter from Cushman & Wakefield's Retail Services Group, the company behind the project, said consumers were looking for a different experience.

"They want a social environment where when they are shopping, they want an experience, not just a product," he told AFP.

The Mosaic complex in Fairfax, Virginia is a mixed-use space featuring a plaza, shops, food market and a children's theatre on a 20-hectare footprint outside Washington.

"We wanted to create a gathering place for the community," said Reed Kracke, development associate at Edens, which built the complex.

"It's not the hectic environment you might see in a crowded indoor traditional shopping mall," he told AFP.

"We really feel if we could capture people's time, their wallets will follow. If they spend their time there, they will spend their money here as well, so we are really after capturing people's time." afp