A woman is choosing a chicken in preparing for the Chinese New Year in Yaowarat on Tuesday. (Bangkok Post photo)

Despite mounting pressure to lower its policy interest rate after last year's dismal economic growth, the Bank of Thailand yesterday hinted it would stand pat on monetary policy at its March meeting. 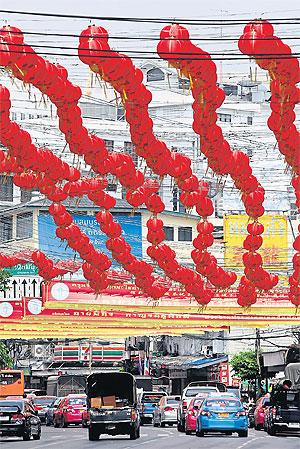 Businesses in Bangkok's Chinatown are gearing up for the Lunar New Year. Part of the area will be closed until Friday for celebrations. THITI WANNAMONTHA

The central bank insists the current rate of 2% is sufficient to support economic recovery and regards fiscal policy as a better tool for ramping up growth.

"We cannot support farmers' income directly, but the MPC believes monetary policy remains adequately relaxed to support the economy, so we're waiting for the economy to pick up and expect consumer spending to improve," he said.

The rate-setting panel is under pressure after businessmen and policymakers asked for a rate cut to spur the economy and prevent the baht from strengthening on expectations of offshore inflows from the European Central Bank's bond-buying scheme starting next month.

A stronger baht could dent exports, the major contributor to GDP.

GDP growth of a mere 0.7% last year also ratcheted up pressure on the central bank, while economists have predicted the MPC will lower the policy rate next month.

Last year's growth was softer than the 1% forecast by the National Economic and Social Development Board (NESDB) and the 0.8% prediction by the Bank of Thailand.

Although fiscal disbursement has not been significantly lower than expected, fiscal policy outweighs monetary measures in terms of stimulating the economy, as the latter rapidly injects cash into the economy while the former consists of pass-through effects over several stages, Mr Chirathep said.

"Banks may not expand their loan portfolios even if monetary policy becomes more relaxed, as they must assess risks in the economic system," he said.

Last year's ebbing private consumption was due to a decline in farmers' income on the back of plummeting commodity prices, Mr Chirathep said.

He said farmers, who comprise 35% of the population, could face low incomes again this year after seeing them decline for three consecutive years.

Manufacturers have not been hindered by the policy rate in terms of costs, while acceleration of fiscal budget disbursement would shore up confidence of businesses and consumers, said Mr Chirathep.

The MPC held the interest rate at 2% at its first meeting of the year last month.

It will hold its next meeting on March 11.

Mr Chirathep said negative inflation recorded last month was not a result of falling prices in every segment but rather due to a decline in energy prices that monetary policy could not influence.

"We still expect positive annual inflation this year, but negative inflation could be seen in the initial stage due to last year's continued base effect," he said.

Mr Chirathep said the inflationary outlook must be assessed on a long-term basis as opposed to using monthly figures.

Mr Chirathep insisted deflation was not occurring since prices of goods and economic growth were not receding even though private consumption had reduced due to a fall in farmers' incomes.

The central bank is cautious in its export growth forecast of 1% this year, as commodity prices could decline in line with tumbling oil prices, with commodity exports making up 18% of export value, Mr Chirathep said.

The Bank of Thailand forecasts economic growth of 4% this year, while the NESDB projects growth will reach 3.5% to 4.5% with export growth of 3.5%.

Mr Chirathep expects Greece will reach a compromise with the euro zone over its debts but said the crisis could affect investors' short-term investment appetite.

However, the baht has not been affected by the problem, he added.

Year-to-date net capital inflows in Thailand's stock market were recorded at US$108 million as of last Friday, according to central bank data.

Also, year-to-date capital outflows of Thai securities up to Feb 5 were recorded at $418 million.