Household debt is likely to hit a record high of 90% of GDP this year and could snowball into a major crisis if left unaddressed, says an expert.

Families' debts may worsen due to sluggish economic conditions and a lack of basic financial literacy, said Piyabutr Cholvijarn, president of the Kenan Institute Asia and director of the Thai Chamber of Commerce.

If debts owed to loan sharks are taken into account, the leverage ratio could already be above 100%, indicating that households are on the verge of collapse, he said.

Mr Piyabutr warned household indebtedness could cause a greater meltdown than the 1997 financial crisis and with more collateral damage.

Few options are available to resolve this possible crisis, he said. (Story continues after the graphic) 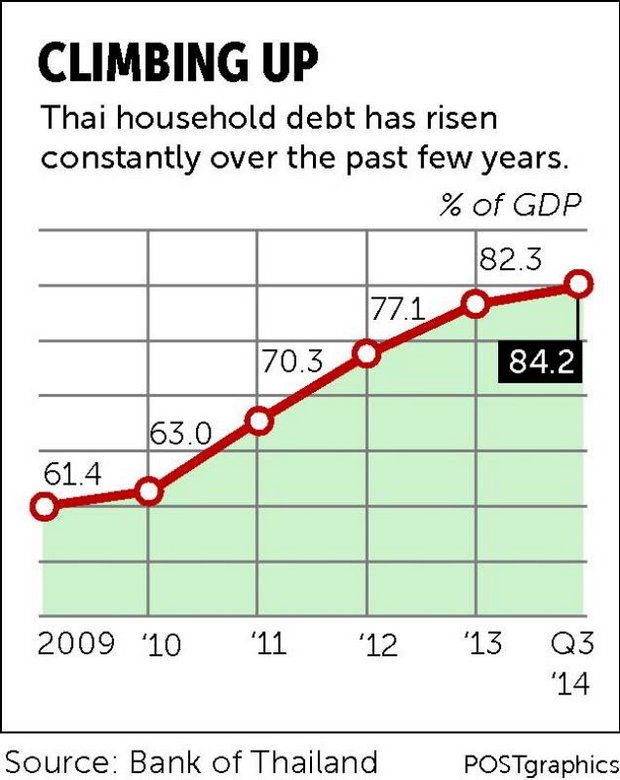 The first-time car buyer scheme and sluggish economic growth have contributed to a continuous rise in household debt, with low earners struggling to keep their heads above water.

Mr Piyabutr said household debt was expanding by 15% each year, but savings were recording only slight growth of 1.5%.

As Thailand becomes an ageing society, the low savings rate among Thais could exacerbate problems associated with life after retirement, as it is expected that one-third of the population will be classified as elderly soon, he said.

The average annual savings of Thai households declined to 4.6% from 2008-12 after recording a healthy 20.2% from 2002-07, according to data from the Finance Ministry's Fiscal Policy Office.

The annual savings rate among Thai households was recorded at 1.2% in 2012, National Credit Bureau data show.

Students, farmers and blue-collar workers are identified as the main groups that have low financial literacy and are at risk of high debt accumulation, Mr Piyabutr said, citing a study entitled "Literacy Improvement for Better Finance in Thailand" by the Citi Foundation and Kenan Institute Asia last April.

It is understandable that farmers and labourers have accrued a high level of household debt due to their low incomes, he said.

At the same time, students are considered the most vulnerable group in terms of debt accumulation since they do not have fixed salaries and obtain loans from the informal sector once they run out of their usual borrowing sources such as relatives.

Mr Piyabutr said creating a project aimed at enhancing financial literacy and financial inclusion with support from the public and private sectors as well as a national savings scheme with a degree of enforcement were possible solutions to elevated household debt.

Nanofinance schemes could help people who have used loan sharks in the informal sector to a certain degree but are not a sustainable solution if financial literacy and savings enhancement are not applied, he added.

Darren Buckley, country head at Citibank Thailand, said about 88% of Thais had access to loans offered by financial institutions and this showed there was a substantial level of financial inclusion among the population.

But significant problems causing swelling household debt stem from financial illiteracy and a lack of financial education, he said.

The study by the Citi Foundation and Kenan Institute Asia found that low-income earners in the North and South have more financial prudence than high-income individuals living in the Central region, Mr Buckley said.