Attempt to quell unease over burden

Homeowners, farmers who own land and landlords for commercial land will be taxed 0.1%, 0.05% and 0.2%, respectively, of the land's appraised value by the imminent land and buildings tax. 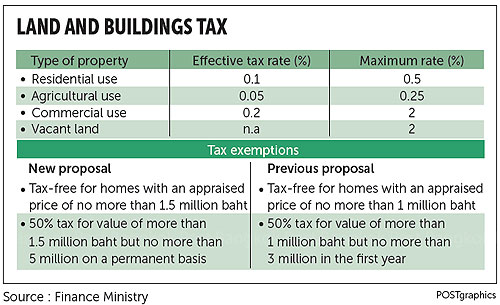 The Finance Ministry is also making a fresh effort to reduce public pressure by widening the ceiling tax waiver amount for residences to 1.5 million baht.

Based on the effective tax rates, the government will collect an estimated 200 billion baht, up from 25 billion contributed by the current local development tax and house and land tax, Finance Minister Sommai Phasee said after meeting with the Committee on Monetary, Finance, Banking and Financial Institutions.

The draft bill of the new land and buildings tax has been under strong pressure, as people feel too much tax burden has been placed on general home- and landowners. The ministry has attempted to allay jitters by halving the ceiling tax rates, providing a tax exemption period and allowing depreciation deductions.

The recently proposed maximum rates were 0.25% for land for agricultural use, 0.5% for residential use and 2% for commercial use and unused or vacant land. For vacant land, the effective tax rate will be doubled every three years, not exceeding a maximum of 2% of the appraised value. The ministry previously set the ceiling rate for unused land at 4%. The tax is expected to take effect in 2017 after the Treasury Department completes appraisals of 30 million land plots, replacing the local development tax and house and land tax, which have been criticised as regressive and based on out-of-date median prices.

Mr Sommai said the Finance Ministry would raise the maximum tax exemption amount for residences to 1.5 million baht after depreciation deductions, up from 1 million previously, to ease public pressure.

The ministry said it was not worried about the foregone tax revenue from the permanent tax discount, as the appraisal value, which usually increases every year, would offset it.

The bill is scheduled to go before the cabinet in the next two weeks, Mr Sommai said.

An effective tax rate for commercial use at 0.2% will not be burdensome for hotel operators, as that will be on par with the house and land tax, which is charged at 12.5% presently.

Mr Sommai said his ministry would allow businesses to use the amount after deducting the land and buildings tax as taxable revenue for corporate income tax.

Local administrative organisations will collect the tax, using it for funding, he said.

The national government now  pays 250 billion baht a year to these local organisations.