Rebranding a regional operating headquarters as an international HQ
Business

Rebranding a regional operating headquarters as an international HQ

The regional operating headquarters (ROH) provisions that Thai tax authorities introduced in 2002 have never been popular, as they are difficult to understand and comply with. As a result, many businesses have bypassed Thailand and chosen Kuala Lumpur for their regional offices. 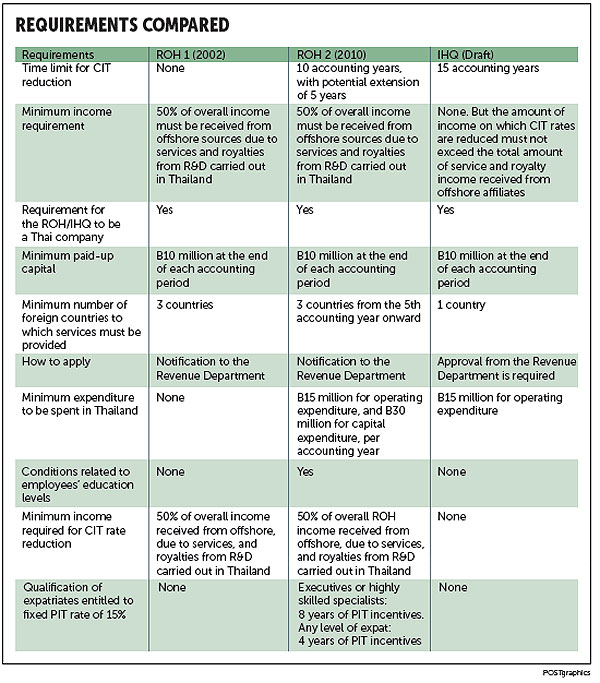 Even a major revamp of ROH regulations in 2010 has not helped. The scope of permitted activities remains narrow, and as a result only a handful of Thai companies have signed on to take advantage of lower personal income tax (PIT) rates for expats or certain corporate income tax (CIT) benefits.

With competition intensifying as the Asean Economic Community approaches, the government is rebranding the ROH regime. Under draft legislation now being considered, new international headquarters (IHQ) provisions will grant tax incentives to a broader scope of businesses — an ROH, treasury centre (TC) or international trading centre (ITC) — for 15 consecutive accounting periods. For instance:

a) A reduced CIT rate of 10% on net profits derived from specific types of income, which differ from those of the ROH — that is, income from administrative, technical or support services rendered to Thai affiliates; royalties received from Thai affiliates; and income from the purchase of raw materials from a Thai source and resale to offshore affiliates for manufacturing purposes.

c) Since the IHQ will render services as a TC — in other words a clearing house for business transactions among affiliates and branches — and as a financial centre for the group, it will be exempt from specific business tax (SBT) on income received from loans granted to affiliates in its capacity as a TC.

d) The in-out loan interest that the IHQ, in its capacity as the TC, pays to an offshore lender that is not doing business in Thailand may be exempted from 15% withholding tax, provided the IHQ on-lends such funds to its affiliates.

e) Dividends the IHQ distributes to offshore affiliates out of CIT-exempted profits (in b above) will be exempted from 10% withholding tax.

Unlike the ROH regime, there will be no limit on the period during which expats working for the IHQ will have the option to pay a 15% flat rate of PIT compared with normal progressive rates from 5-35%. However, there will be no PIT exemption for expats sent to carry out duties offshore.

Tax incentives for offshore dividends received by the IHQ are more attractive than those granted to a Thai company. The latter is exempted from CIT on offshore dividends only if foreign tax of at least 15% has been imposed on profits from which such dividends have been distributed. The IHQ provisions do not require such foreign tax to be paid by the offshore affiliate as a prerequisite. As well, the IHQ is exempted from CIT on capital gains from the sale of shares in foreign affiliates.

Some critical interpretation issues remain. For example, what will the SBT treatment be under c) above if the IHQ, as a treasury centre, receives income in the form of a discount from debt instruments or income from derivatives? Also, will CIT be exempted under b) if the foreign entity renders administrative or technical services in the ordinary course of business to customers in general and simply subcontracts such work to the IHQ to take advantage of the tax benefits?

The IHQ may be subject to additional conditions to be issued by the director-general of the Revenue Department. Nonetheless, the draft legislation is expected to be more appealing than the ROH, as the comparison table shows.

Where an ROH fails to fulfil any of the above conditions, it will be considered disqualified from tax incentives from the beginning and liable for all taxes and surcharges retroactively. If an IHQ commits the same error, the disqualification will be limited to the relevant accounting year only.

WASHINGTON - The United States said Monday it would maintain restrictions on international travel into the country, sidestepping European pressure, pointing to a surge of cases of the Covid-19 Delta variant at home and abroad.