The Energy Regulatory Commission (ERC) is in talks with several private power producers that received licences to develop plants, urging them to postpone commercial operations until 2022.

Commissioners say power demand is unlikely to rise as high as was earlier anticipated.

The move is likely to affect the business plans of those power plants, which were about to ask for appropriate compensation should their business plans be delayed.

According to commissioner Kraisi Karnasuta, the ERC is negotiating with those companies that were granted licences but have yet to start their projects since the ERC predicts power demand over the next five or six years will be lower than expected.

The major power producers likely to renegotiate are those whose plants are scheduled to begin operating during the 2017-21 period including the Electricity Generation Authority of Thailand (Egat), Gulf Power Co and National Power Supply Co.

Mr Kraisi blamed the global economic slowdown and Thailand's political unrest for falling power demand, which was earlier estimated to rise by 4-5% a year.

Real consumption has risen by 3-4% annually.

The ERC's forecast for falling power demand is in line with that of Egat, which had expected electricity demand during this year's hot season to reach 27,600 megawatts, up by 2.4% year-on-year.

Real consumption instead has dropped to 26,600 MW.

But the ERC's plans have prompted a mixed response from private power plants.

"The ERC should have negotiated with the plants on a case-by-case basis, as they would involve different situations," said Narongchai Visutrachai, president of the Association of Private Power Producers. 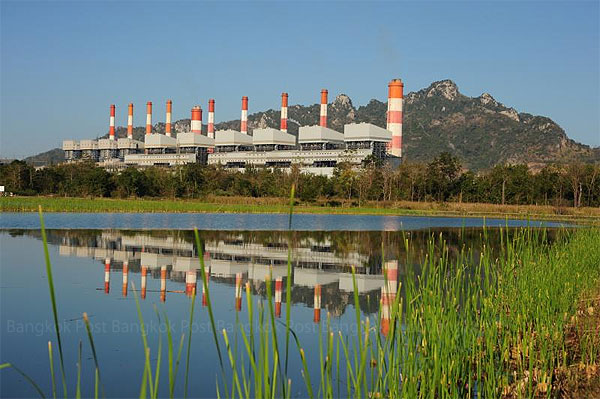 The Electricity Generating Authority of Thailand's Mae Moh power plant in Lampang province is a major electricity supplier for provinces in the North. State authorities are asking some planned new power plants to delay operations due to lower-than-expected energy demand.

"Some plants could delay their projects with some fair compensation, but others would have to start their projects as planned, or else their business plans would be severely affected."

A source from Double A Group said the company was still waiting for a clear direction from the ERC.

Any decision concerning whether to delay projects would have to be approved by Double A's board, the source said.

China-backed Double A plans to spend 10 billion baht to develop two biomass power plants in Prachin Buri province, with power-generating capacity of 98 and 120 megawatts. The company already calls itself a leader in the renewable energy business.

Egat governor Soonchai Kamnoosate said his agency would be able to delay the delivery of power only from its gas-fired Wang Noi Units 1 and 2 in Ayuthaya with a combined capacity of 1,200 MW.

Power delivery from other plants is unlikely to be postponed.

Mr Soonchai said southern power plants such as the coal-fired facilities in Krabi and Songkhla could not be delayed, as these would help to ensure power security in an area where supply was tight.

The ERC also officially launched a campaign to help reduce power demand from April 10-27, when natural gas supply from Myanmar for Thailand's power generation is due to be disrupted.

Power plant operators will have to switch from gas as an energy source to diesel and bunker oil, meaning costs will rise.

ERC member Viraphol Jirapraditkul said the disruption in gas resources would cut power supply by 8,000 MW from a total capacity of 35,000 MW.

The ERC plans to encourage power users to cut down on consumption by giving them three baht per kilowatt-hour in cash back in a bid to prevent a power shortage during the gas supply disruption.