Sky's the limit for Kan Air

After breaking up with partner Thai VietJet Air (TVJA), commuter airline Kan Air has geared up its own expansion. 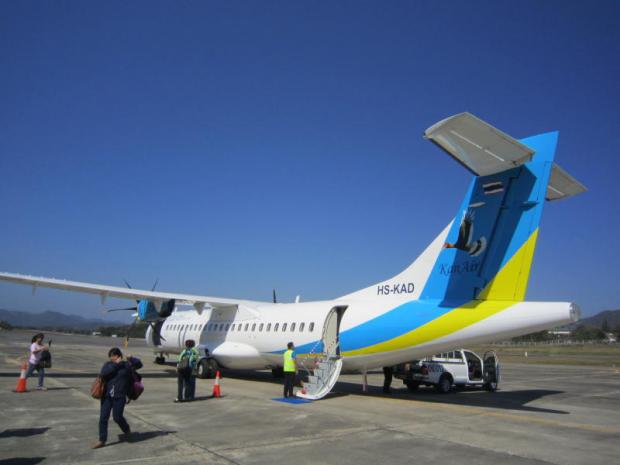 The privately owned airline is establishing a new network to start scheduled flights from its second base at U-tapao airport while adding two more ATR 72-500 turboprop aeroplanes to its fleet.

The airline will soon receive two ATR 72-500s from an aeroplane lessor to join the two it already has.

Last month, Mr Somphong revealed he was offloading his 51% holding in TVJA, the long-delayed start-up low-cost carrier in Thailand owned 49% by the Vietnamese budget carrier.

Citing differences between his and VietJet Air's business management styles, he said he wanted to concentrate on building up his own airline, which was founded in 2010.

Right from its start, Kan Air has operated from its sole base at Chiang Mai airport on routes not offered by other airlines such as Ubon Ratchathani and Hua Hin. It now flies to 10 destinations from the northern capital.

Until last December, Kan Air had operated only two smaller aircraft — a single-engine Cessna Grand Caravan 208B propeller aeroplane with 12 seats and a Hawker Beechcraft Premier I, a six-seat jet.

Mr Somphong told the Bangkok Post that Kan Air wanted to tap new travel demand potential out of Rayong and Pattaya to other parts of Thailand, eliminating the need for people to use Don Mueang or Suvarnabhumi airports.

"We want to think outside the box, to develop a new market of our own and avoid competition,'' he said.

Kan Air intends to operate flights out of U-tapao on alternate days with a net flat fare of 990 baht per sector and a free shuttle bus from Pattaya.

Its passenger volume is expected to increase ten-fold this year to 400,000.