Loxley now has three plug-in stations for its electric cars.

Loxley Plc, one of Thailand's biggest trading conglomerates, is studying the feasibility of an assembly plant for electric vehicles (EVs) in the country.

According to adviser Kosol Surakamol, an assembly plant for EVs would be viable if the company could sell 500 units a year.

The company yesterday teamed up with China's BYD Auto Co, an EV maker, to sell electric buses and passenger cars under the BYD brand in Thailand.

Loxley aims to sell a combined 200 units within two years.

Mr Kosol said the company would approach state agencies, airports, car-rental companies, hotels and taxi operators, adding that EVs for personal use have yet to become popular in Thailand because only rich people can afford them.

"Electric vehicles remain expensive for ordinary drivers, and the market is quite small," he said. "But we still foresee promising demand."

The 12-metre K9 bus and the multi-purpose e6 are the first models to be made available on the Thai market, respectively priced at 12 million and 3 million baht.

Loxley spent about 5 million baht on each charging station.

The company plans to construct at least four stations in Greater Bangkok within two years.

"I hope that more electric vehicles on the road will help stimulate the market and spur charging station expansion, which is the core infrastructure for these vehicles," Mr Kosol said.

"The Thai government should also help promote electric vehicles in the country by offering tax incentives to attract more buyers." 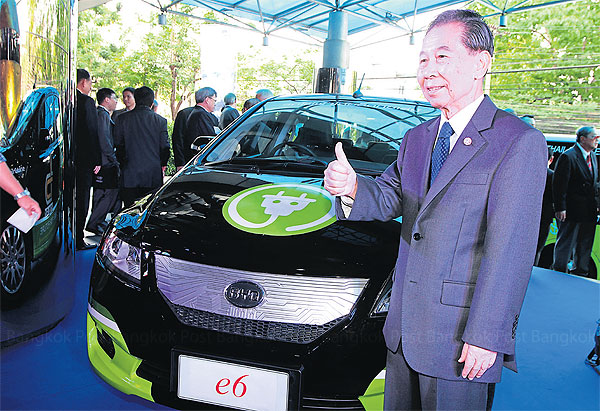