Squabbles between the government and the telecom regulator threaten again to delay the 4G spectrum auctions.

Despite the advertised hype, Thais may have to wait a little longer to enjoy full 4G service. Wichan Charoenkiartpakun

Internet use in Thailand rose at the highest rate in the world last year, climbing 34 ranks in the latest global study conducted by the International Telecommunication Union (ITU).

Although Thailand started using 3G mobile services later than most countries, the conversion rate from 2G to 3G was the fastest in the world, with more than 2.85 million 2G subscribers switching to 3G in less than five months after commercial service began.

The Digital Advertising Association (Thailand) says as of last Sept 30, smartphone users accounted for more than 30% of the 100 million total mobile subscribers out of a population of 70 million.

There are 180 million voice calls and 250 million internet connections made daily over mobile networks. In addition, there are 33 million Line users in Thailand, making it the second-largest user base after Japan.

Thailand has the third-largest Facebook population in the world with 28 million users. Bangkok has more Facebook users than any other city in the world.

The country also has the second-highest number of YouTube video views in Asia, with 53% of users watching at least one video a day.

The 2014 Measuring the Information Society Report ranked Thailand's internet use at 71st, up from 105th for 166 countries studied by the ITU.

The sharp rise in internet use in Thailand was partly supported by the allocation of the international-standard 2.1-gigahertz band for 3G mobile service and the increase in mobile internet use.

As a result of improvements in internet use, Thailand's overall ICT Development Index (IDI) rating rose to 81st, up by 10 places. Besides internet use, the IDI also measures internet access and skills.

The study was in line with another last year by the World Economic Forum on ICT competitiveness through the Network Readiness Index, in which Thailand was ranked 67th, up from 74th in 2013.

The statistics indicated these technologies contained a wide range of benefits including making life easier, boosting productivity within industries across countries and enhancing the development of national telecommunications network infrastructure.

4G is the fourth generation of mobile telecommunications technology, which in addition to the usual voice and other services of 3G, provides mobile broadband internet access such as to laptops with wireless modems, to smartphones and to other mobile devices. Potential and current applications include amended mobile web access, IP telephony, gaming services, high-definition mobile TV, videoconferencing, 3D television and cloud computing.

The three major mobile operators Advanced Info Service (AIS), Total Access Communication (DTAC) and True Move have announced they are ready to invest in 4G to accommodate the explosive growth in mobile data traffic. These operators want the 4G spectrum auction to take place this year.

The government has acknowledged the influence 4G has on the country's ICT infrastructure development and that it is essential to the country's future social and economic development. It recently decided the 4G spectrum auction would take place this August, after suspending the auction for one year.

The government is being urged to put the unused 2300-MHz spectrum of TOT Plc and the 2600-MHz spectrum used by MCOT Plc into the auction together with the planned telecommunications spectra of 900- and 1800-MHz.

She says the digital economy initiative will rely heavily on the technology infrastructure development of the country including network development of mobile phones and broadband internet.

"Strategic policies and a clear platform for future development must clearly be expressed by the government before moving ahead with its digital economy policy," Ms Neeranuch says.

Thailand has an opportunity to enter the digital age immediately with state-of-the-art broadband networks that can spur innovation and economic development. But it is essential the government make adequate spectrum available to mobile operators for this purpose.

"Alternative spectra that are currently idle or underutilised including by public agencies should be considered for reallocation to auctions that can generate greater benefits for the local telecom industry and enable operators to provide affordable services," he says.

"Multiple-band spectrum auctions will enhance the use of network resources and increase mobile data network capacity," he says.

"The low band of spectra is better at penetrating obstacles and providing better signal quality, while the high band offered higher network capacity." 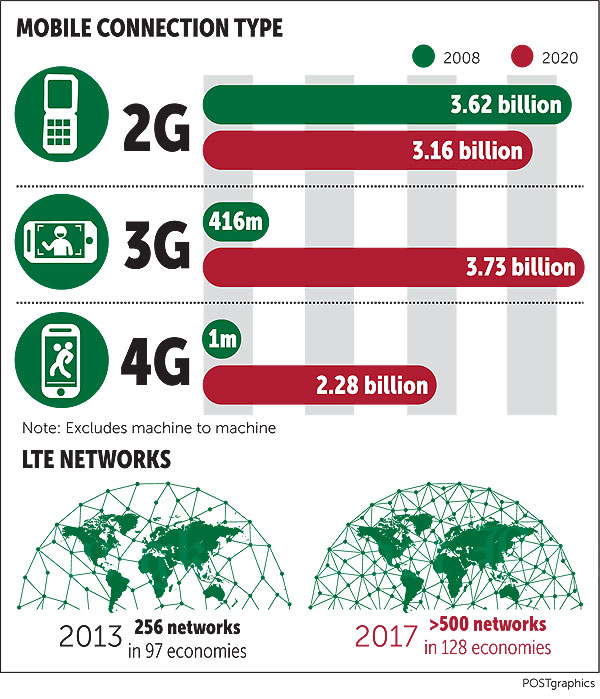 "At least 20 MHz of bandwidth is required to provide efficient 4G service," he says.

AIS chief executive Somchai Lertsuthivong says the more spectra available, the greater the speeds and capacity of 4G services will be.

The number of smart devices in Thailand is expected to surge to 65 million by 2019 from 30-33 million currently, he says.

"Any further delay in 4G auctions will only slow down the development of the nation's digital infrastructure," Mr Somkiat says.

Industry veterans say the painfully long time it took for 2G and 3G connections in Thailand should serve as a warning.

"Thailand needs to quickly adopt new 4G mobile technology if it wants the digital economy initiative to get off the ground to support the imminent launch of the Asean Economic Community," says a telecom academic who asked not to be named.