As rice mountain shrinks, a rubber one rises
Business

As rice mountain shrinks, a rubber one rises

Rubber farmers in the Bung Kan province lay out latex at a market to sell. (Photo by Pattarapong Chatpattarasill)

Eight months after the government started selling rice into an oversupplied global market, officials are taking a different tack amid a rubber glut.

But this approach by the world's biggest exporter of both commodities may cause as many problems in global markets as the old one, analysts say. That's because while the rubber purchases revived domestic prices that touched a five-year low in October, they're failing to cut a global production surplus that is entering its fifth year, according to data from the International Rubber Study Group.

Demand is slowing in China, the world's top buyer and tyre exporter, and natural rubber faces stiffer competition from synthetic material made from crude oil, which costs half what it did a year ago. Rubber prices are down more than 70% from their 2011 peak as trees planted in Asia over the past decade matured and flooded the market. That hurt farmers and cut costs for users of the raw material, including Goodyear Tire & Rubber Co and Michelin & Cie. 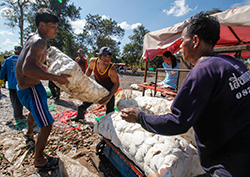 Rubber farmers in the Bung Kan province unload their latex crop at a market where it will be sold. (Photo by Pattarapong Chatpattarasill)

"Thailand's approach is just pushing the problem down the road," Colin Hamilton, head of commodities research at Macquarie in London, said by email on March 20. "The market needs supply to exit, not be encouraged."

To some observers, the government may be supporting rubber farmers to ensure political stability. The growers who backed Prime Minister Prayut Chan-o-cha's takeover have successfully lobbied for subsidies as prices slumped, said Ambika Ahuja, a London-based analyst at Eurasia Group, a political-risk adviser.

In addition to buying at above-market prices, the government makes direct payments to growers and helps with borrowing costs. While the government has ruled out purchasing rice, it also makes payments directly to farmers and subsidises loans to help millers and growers with storage. 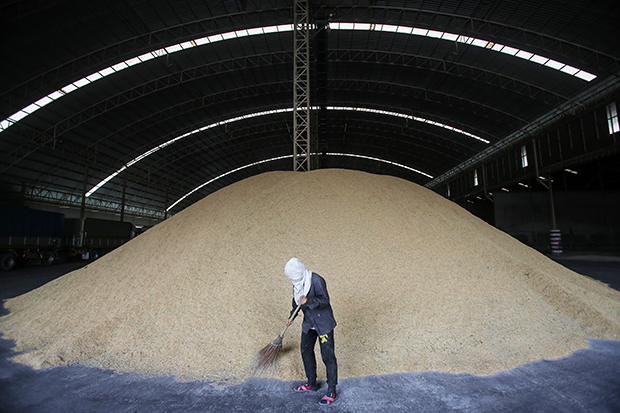 An employee sweeps rice into a pile in a warehouse at the Rouysabthavorn rice mill in Bang Sai, Ayutthaya province on March 21. Thailand plans to cut production to reduce a local surplus and boost prices, complementing a drive by the government to sell record stockpiles that are clogging warehouses nationwide. (Bloomberg photo)

Ms Yingluck's opponents say the rice program was part of a pattern of corruption. She denies the corruption charges.

Southern Thailand is home to 70% of domestic rubber output and many local farmers supported protests against Ms Yingluck's regime. About 1.6 million households in the nation of 65 million people own rubber plantations and exports totalled $6 billion last year, government data show. Some 4.4 million households grow rice, with shipments valued at $5.4 billion. 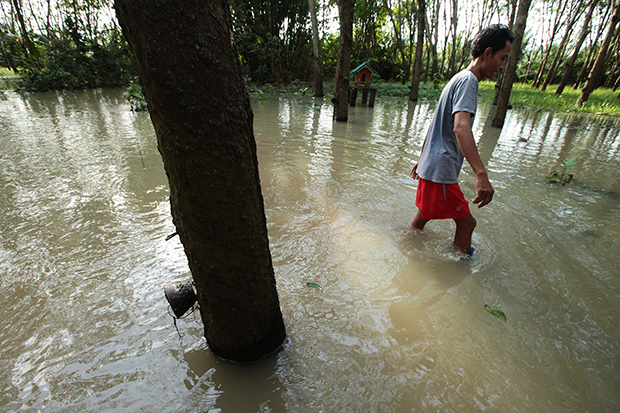 A farmer walks through his flooded rubber farm in Surat Thani province in December. (Photo by Patipat Janthong)

"The government has to step in as the market mechanism alone is not enough to help farmers have enough income to offset costs of living," Amnuay Patise, deputy minister for agriculture and cooperatives, said in an interview on March 6, when asked why the government changed its policy toward direct purchases. "We'll buy when farmers are in trouble."

While the government measures don't solve the farmers' problems completely, they're better than doing nothing, said Sangwern Tuadhoy, the president of the Thai Rubber Growers Network, who owns a 100-rai plantation in Rayong province.

"We decided to buy rubber, as an additional step, to increase prices and there's no hidden political agenda," government spokesman Sansern Kaewkamnerd said by phone on April 2. "We're not aiming to build a voter base because this is an interim government." 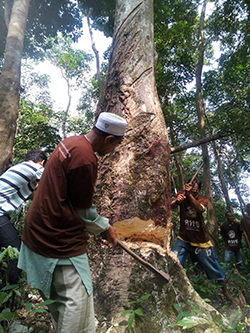 Thailand, Indonesia and Malaysia, which account for two-thirds of world production, said in November they would limit exports to tighten supply. The global surplus will narrow to 51,000 tonnes in 2016 from an estimated 77,000 tonnes this year, the International Rubber Study Group said in January.

Prices of ribbed smoked sheet grade 3 in Bangkok, the Thai benchmark, averaged 58.59 baht ($1.80) a kilogramme in March compared with 52.79 baht in October. That was lower than rubber on the Shanghai Futures Exchange, which averaged about 12,802 yuan a ton, or 67 baht a kilogramme. The contract in Shanghai increased 1.1% to 12,765 yuan on Thursday.

The government is also encouraging farmers to fell aging trees over an area of 400,000 rai annually, with some land being turned over to palm oil. That may reduce production by about 100,000 tonnes a year, according to data from the Office of Agricultural Economics. Output will be 4.3 million tonnes in 2015, the Association of Natural Rubber Producing Countries estimates.

Prices will find little support from China, where the producer group predicts imports will drop 9.9% this year, the first decline since at least 2010. China forecasts economic growth of 7%, the slowest pace since 1990.

The Thai government has bought 130,000 tonnes since November, Mr Amnuay said March 6. Buying probably will resume in May, he said last week. "Small-holders want the government to continue purchases and we're listening to the voice of farmers," he said.

Buying is "artificially distorting the market," Michael Coleman, managing director of RCMA Asset Management Pte, said in Singapore on March 25. "It's keeping the price higher than it otherwise would be. Thailand just created a case study of that with rice in the most dramatic fashion you could imagine."