"We have to bring in other factors to compensate for lower exports, and government spending could help," he said yesterday.

"I do not refute that an export contraction would affect GDP growth, but we cannot control it. Government spending is a factor we can control, and the disbursement rate in the first quarter was better than in last year's fourth quarter." 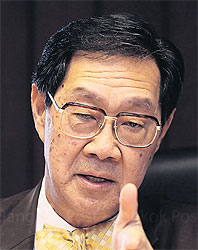 The first-quarter export contraction of 3% is an estimate based on the decline in shipments over the first two months, which fell by 3.46% year-on-year in January and 6.14% in February, MR Pridiyathorn said.

He said the government’s economic stimulus packages such as construction and repair for 8,000 schools are aimed at enhancing job creation and have been on track. Surveys conducted to provide cash handouts to farmers during the dry season in 3,051 tambons have been completed, and the handouts are expected to commence this month. Each tambon will receive cash support worth 1 million baht.

Meanwhile, the government’s move to replace martial law with Section 44 could benefit the tourism industry, compensating for exports, MR Pridiyathorn said. Without martial law, tourists can qualify for travel insurance, which should raise arrivals for meetings and conferences.

Bank of Thailand governor Prasarn Trairatvorakul said the government might want to explain to foreign countries how Section 44 would be imposed temporarily and how there is a roadmap for an election and new constitution.

Section 44 could affect trade and investment with foreign counterparts, as they are not familiar with the rule, but the return of peace and order should help trade, he said.