The Tourism Authority of Thailand (TAT) is using a Discover Thainess gimmick to lure foreign tourists to visit 12 overlooked provinces most people miss on their trips here.

The Bangkok Post is working on a series about these 12 provinces' tourism potential, infrastructure readiness and problems an influx of tourists may cause. We start with Lampang.

Lampang has not changed over time, yet the northern province has more going for it than riding horse-drawn carriages.

Situated in the Wang River valley in the heart of the North, Lampang is still growing rapidly as a trading and transport centre. The main sources of income for residents are from trade and ceramic products.

Only an hour-and-a-half ride from Chiang Mai, Lampang has a lot of historical interest and Lanna culture similar to "the capital of the North" without the overt commercialisation. If the city can draw tourists to its lesser-known attractions, it can grow its tourism business along with Chiang Mai, which is very crowded.

Kittipoom Namvong, mayor of Lampang municipality, says the province is full of interesting tourist destinations, but the city must gradually unveil them to tourists. It has a hot spring, a national park and famous temples and pagodas.

"If the province can do that, its tourism will boom in the next three years," he says.

Moreover, there are many local festivals and rites organised almost every month, and these events can attract visitors. The TAT should promote them, Mr Kittipoom says.

Chotechuang Soorsngura, associate managing director of NS Travel and Tour (Num Sao Tour), says Lampang's uniqueness and abundant natural resources give it the potential to become a main tourist destination in the North, as people like to take vacations to relieve tension.

Social networks also play a part in influencing where people vacation, he says, pointing to the boom that happened in Pai, Chiang Khan and Koh Tachai. Social media and word-of-mouth marketing led to their popularity, and the same can happen for Lampang.

"I think Lampang is ready now. It will surely boom when someone turns the spotlight on it," Mr Chotechuang says.

Pai is now used as a shooting location for films, as its natural beauty attracts visitors.

Lampang provincial authorities have already started preparations to turn their province into a tourist destination in coming years.

"We have a big project to preserve more than 100 old houses, each of which has been standing for at least a century. We think besides preserving them we should give them life, so we plan to turn some of the old houses into homestays," Mr Kittipoom says.

About 30 old houses will open to tourists this year. Their owners are open to the idea, and the municipality will train them in hospitality standards.

The homeowners want to preserve their houses, so the homestay service provides an activity for the families but will not be a major source of income.

"They will continue to live in the houses and maintain their lifestyle. The homestay activities will help to maintain the old houses and the culture," Mr Kittipoom says.

Lampang municipality has a 22-square-kilometre downtown filled with more than 1,000 trees that are centuries old. It also has 40 Burmese-style temples and the Kad Kong Ta market, which is the prototype of a walking street market.

The province boasts an interesting history, as the first forest concession to a foreign party in Thailand was granted there.

But no matter how eager residents are for tourism development, the integrity of their communities has never been compromised.

The municipality has imposed zoning rules that ensure the old city and new commercial areas are separated. Big C, Lotus and Central shopping projects are in the new commercial zone.

"We realised investors would arrive and try to drive tourism growth, but we still stress sustainability," Mr Kittipoom says.

The municipality encourages local communities to take part in development, speaking up if investors take improper steps, which could mean a ban from the area.

Lampang residents still adhere to their old beliefs and will not do anything that would negatively affect those beliefs, Mr Kittipoom says.

There are only 2,300 hotel rooms in the province, which is not enough to accommodate a major tourism boom. Arrivals in Lampang are likely to grow by as much as 40% this year, Mr Kittipoom says. The Tourism Department reported Lampang generated 2 billion baht from 687,412 tourists in 2013. 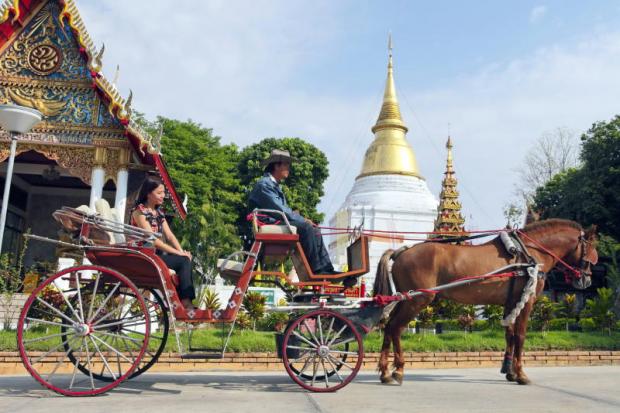 Locals are wary about the TAT's campaign to promote Lampang, as past governments did not keep similar promises to promote the province, says Surapon Tansuwan, president of the Tourism Council of Lampang.

"We hope the new initiative will work out so Lampang will not be an en-route province for tourists any more," he says.

There have been some positive signs, as the TAT launched the campaign late last year and since then tourism has improved. From December to February, the hotel occupancy rate rose to 90% on long holidays.

The Lampang airport has also been transformed from a deserted facility to serving seven flights a day, a positive sign.

Most of the hotels here are rated three stars, and although rooms have almost doubled from 1,250 in 2011, Mr Surapon says the figure needs to double again in the next few years to serve as a major tourist destination for Thais and foreigners, especially Chinese travelling from Chiang Mai.

New hotels should be of the boutique variety to fit the characteristics of tourism products from the province, he says.

La-iad Bungsithong, president of the Thai Hotels Association's northern chapter, says two more hotels in Lampang are under construction, but they are small. Most of the hotels in the province are owned and operated by locals.

"New hotel investment will rely on market demand and a positive tourism outlook. For Lampang, if there is strong proof more foreign tourists will come, some investors may build new hotels," she says.

However, many hotel owners are worried about long-term tourism promotion for Lampang. If tourists visit the city only for the short term, new hotel investment is not feasible, Ms La-iad says.