The number of international tourist arrivals rose 23.4% year-on-year in the first quarter to 7.86 million, says the Tourism and Sports Ministry. 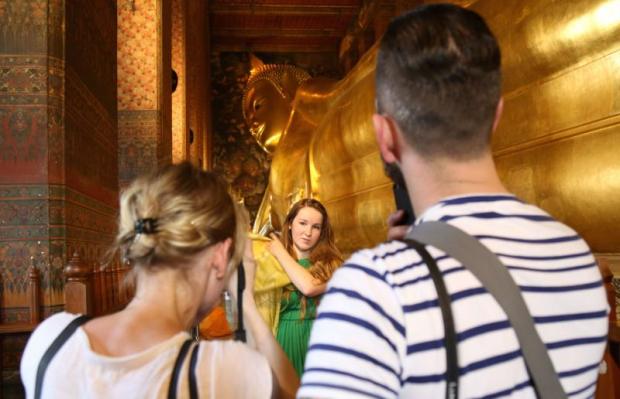 Chinese tourists topped the ranking, followed by those from Malaysia, South Korea, Russia and Japan.

He expected the number of foreign visitors would reach its target of 28.8 million this year and generate income 2.2 trillion baht.

Yesterday the ministry also reported international tourist arrivals between April 1-4 rose, reaching 337,490, up 37.8% from 244,919 in the same period last year.

He said better infrastructure connectivity to neighbouring countries helps support foreign arrivals. Chinese arrivals via Chiang Rai were estimated to reach 5,000-6,000 during the Songkran festival. Some 4,000-5,000 of them came during a recent Chinese festival.

The ministry expects the Songkran festival will draw around 500,000 foreign tourists and 2.1 million Thai visitors.

Prime Minister Prayut Chan-o-cha said yesterday the government pledged to accelerate tackling Thai aviation standards within a month to prevent any negative impact to tourism, which he described as one of two key drivers for the Thai economy this year along with government spending.

Meanwhile, the Tourism Authority of Thailand (TAT) plans to boost tourism during the low season to achieve the government's 2015 tourism revenue target of 2.2 trillion baht as the country's exports face a big decline. Exports are expected to grow by less than 1%.

Juthaporn Rerngronasa, the TAT's acting governor, said the agency would shift its focus to the three highest potential markets — Africa, the Middle East, and Australia — thanks to their positive economies.

In May, the TAT will bring 60 Thai tourism operators to the Arabian Travel Market 2015. It also plans to organise roadshows and bring 30 tour operators to Johannesburg, South Africa, and 30 different operators to cities in Australia and New Zealand.

Ms Juthaporn is confident growth of the three focal markets will reach at least 5% to 858,050 visitors during the low season. The second and third quarters are also the travel season for these three markets, which make up 6.43% of total arrivals.

The TAT estimated Russian tourist arrivals will drop more than 30% to 1.2 million this year while Norway, Sweden, Finland, and Denmark will decrease by 5% as a group.

She said weddings and honeymoons represented an intriguing market because spending per head for this group is three times higher than for European travellers, who spend 70,246 baht per trip on average.