Tourists arrive on Koh Samui on Sunday to join the Songkran celebration. (Photo by Thanarak Khunton)

SURAT THANI - The car bomb at Central Festival mall on Koh Samui could take a toll on tourism on the resort island, the Tourism Authority of Thailand's office in the southern province warned on Sunday.

Prapas Inthanonpasat, chief of the Surat Thani TAT office, said there would be consequences from the explosion in a parking lot at Central Festival on Friday night, and that could be an erosion of confidence in the island as a safe tourist destination.

Foreigners pay extra attention to safety with any country they plan to visit, he added.

Mr Prapas urged authorities to quickly solve the bombing at the shopping centre, which injured seven people, including a young Italian tourist, to restore confidence among vacationers. 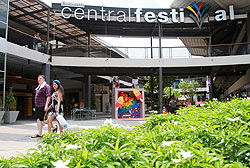 Authorities are still trying to shed light on the motive for the attack.

But the explosion has not deterred Koh Samui from celebrating Songkran with all activities, including events at Samui Festival, and Chaweng and Bo Phut beaches, being held as planned.

The mall was reopened on Sunday after closing all day Saturday because of the bomb.

Senee Puwasetthaworn, president of the Tourism Association of Koh Samui, said the bomb had had only a slight effect on tourism for the moment. Most tourists had not cancelled their hotel reservations for Songkran.

At least 20,000 foreign and local tourists are celebrating the traditional New Year in the province, according to estimates by deputy provincial governor Wichawut Jinto. They are expected to spend 990 million baht for the long holiday, with Samui on top of the list at 632 million baht, he said.

The Songkan festival officially runs from Monday to Wednesday. Activities on the island and other parts of the country began on Sunday.