Back to the hills
Business

Back to the hills

Kaen Makrut in Uthai Thani uses self-sufficiency and elevation to climb out of debt.

Sifah Krungkrai, 28, decided to come back home for good after working for years in the city selling clothes and not managing to save any money.

Home is tambon Kaen Makrut, and Mr Sifah was inspired by the Pid Thong Lang Phra (doing good without expecting anything back) programme.

This is a royally-sponsored initiative that early last year developed weirs and reservoirs for four villages in Kaen Makrut, one of 13 tambons in the Ban Rai district of Uthai Thani province in the lower northern region of Thailand.

The inhabitants of this mountainous area are mostly Pwo Karen people with Thai citizenship, and it includes the Huai Kha Khaeng Wildlife Sanctuary, a Unesco world heritage site.

The tambon is about 600-800 metres higher than sea level and the average annual temperature is 24 degrees Celsius and 5-8 degrees in the cold season, making it ideal to grow temperate fruits and vegetables.

The project specialises in rural development using His Majesty the King's sufficiency economy philosophy to tackle the problems of deforestation, flooding and poverty. It sends officials to convince farmers to grow strawberries and temperate fruits in lieu of single-crop farms.

Ming Yo, Sifah's father, participated in the Pid Thong Lang Phra scheme last May and changed his four rai of rice paddy to grow other crops such as strawberries, avocados and durian, as well as an area for breeding fish. 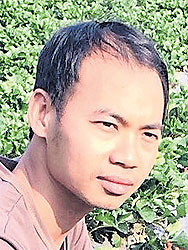 Mr Sifah started growing strawberries on a one-rai plot on his father's land last August, and continued with a second crop in November which he harvested in February and March. He made an unexpected profit of at least 100,000 baht per crop.

Mr Sifah is not new to strawberries. He tried to grow the temperate fruit three years ago but failed, citing inappropriate growing methods and a lack of knowledge.

Once he joined the project, Mr Sifah was trained on how to grow temperate fruits and other crops following the sufficiency economy philosophy and proper farming skills. The programme teaches farmers to learn from the experiences of other farms in the same scheme.

"I never thought I could make a profit of up to 100,000 baht per crop from growing strawberries," he says. "The programme has bettered my life not only from the income from strawberry sales but that from tourist visits and the homestays we provide."

Phadet Nuipree, president of the Uthai Thani provincial administration organisation, says 8,960 rai of preserved forest areas had been encroached upon and converted into farming area over the last 23 years, so the province asked the Pid Thong Lang Phra project to expand last year.

Given the proliferation of strawberry farms, Kaen Makrut plans to develop the area as a new tourist attraction following the success of Doi Tung as a model.

He says the project supports farmers changing from a farming monoculture, be it rice, maize or tapioca, to other crops such as fruits including bananas, strawberries and avocados, as well as fish farming.

Mr Phadet cites a survey from June 2014 that found people in Kaen Makrut owed a combined 80 million baht in debt, incurred mainly from growing single crops such as maize and tapioca through heavy use of chemical fertilisers and purchases of machinery.

"After a year of the Pid Thong Lang Phra scheme, we've found people here are earning higher incomes and living better lives with less forest encroachment," he says. "We fully hope to develop Kaen Makrut as a new tourist attraction over the next three years."