NEW YORK - Mark April 23, 2015 as the day the Nasdaq market finally left the dot-com crash, and billions of dollars lost to the first technology bubble, behind. 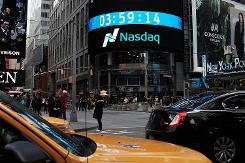 This time around, the gains on the Nasdaq exchange might hold on for a bit longer.

The upstart market that symbolised the new era of the Internet economy and digital life -- as opposed to the old heavy-industry stalwarts of the Dow Jones Industrial Average -- climbed spectacularly from 1996 to early 2000.

Over that time the index quintupled to mint thousands of new multi-millionaires and fund sharp and quirky new companies rooted in San Francisco and Silicon Valley. The Dow barely doubled in the same period.

Investors and media celebrated it as the "New Economy," leaving the old one behind. The Nasdaq exchange itself was the symbol, trades humming through computers while the New York Stock Exchange still had dealers operating via slips of paper and hand signals on a physical trading floor.

But the Nasdaq, trading many companies that proved to be more dreams on paper and in garages than sources of tangible profits, then crashed as spectacularly, losing nearly all of the late 1990s gains in 30 months, and stunning hundreds of thousands of investors who ventured into the markets for the first time drawn by dot-com dreams.

Spurred by the economy's growth under low interest rates and higher government spending, it slowly regained the trust of once-burned investors and pressed back toward the 3,000 level, only to have the rug pulled out again with the financial crisis.

That time, all the markets plunged, and the Nasdaq, which was strengthening with more proven Internet and biotechnology companies, fared better than the other key indices, the Dow and the S&P 500.

From the 2009 bottom, the Nasdaq bounced back faster and farther. Yet by 2013, when the Dow and S&P began topping previous records and continued to do so, the Nasdaq was still two years from total recovery.

The return to the heights of 2000 has been driven by significant shift in the makeup of the Nasdaq market.

In 2000, the index was led by software companies and chipmakers: Microsoft, Cisco, Intel, Oracle and Sun. Yahoo was the seventh largest company on the exchange, Amazon ranked 41st and Apple 45th. Google was just emerging in the industry, and only joined the exchange in 2004.

Today it's Apple at the top, now the largest company in the world, worth $755 billion by market capitalization.

Google is the Nasdaq's second largest company at $372 billion, and Microsoft is only third, worth $356 billion, its share price still one-third lower than the peak 15 years ago.

Amazon, the online retailing king, is fourth and a company no one had dreamed of at the time, Facebook, fifth.

Intel and Cisco are still among leading companies, but are now flanked by telecoms -- Comcast and Qualcomm -- and biotech firms like Gilead, Amgen, Biogen and Celgene.

Those, and a range of other less technology-focused companies like Walgreens and Starbucks, have underpinned what analysts say is a more healthy rebound grounded in real profits and growth of the companies.

Michael Stiller, a technology sector analyst at Nasdaq, points out that the world itself has changed since the early dot-com days. Smartphones have revolutionized personal communications, access to the Internet has spread globally through China, Africa and elsewhere, and now doing business online is near-universal.

But like the S&P 500, which barely missed setting a new record Thursday (the previous one set just six weeks ago), the Nasdaq market has reached its new highs with the help of the Federal Reserve keeping interest rates at their lowest levels in history for more than six years.

That has pushed money toward stocks that, at more normal interest rates, might not sustain such valuations, say some analysts. But valuations on the Nasdaq are still far more sane than they were in 2000.

The price/earnings ratio for the market Thursday stood at about 25 times, compared to about 190 when the market peaked in March 2000.