A worker sorts rubber tree logs into piles at Srithep Parawood Co in Wang Wiset district of Trang in this 2011 file photo. Benchmark rubber prices slid to a five-year low in October as trees planted in Asia over the past decade matured just as the Chinese economy slowed. But prices are recovering. (Bangkok Post photo)

Rubber prices jumped the most in nine months as shrinking stockpiles in China and steps by the biggest producers to curb supplies bolstered speculation a global glut will dissipate.

The commodity surged 5.5% on the Shanghai Futures Exchange, the daily limit and the biggest gain since July for a most-active contract, to close at 14,195 yuan (US$2,288) a tonne. Prices are up 13% this month, the most since September 2012.

Benchmark rubber prices slid to a five-year low in October in Tokyo as trees planted in Asia over the past decade matured and flooded the market just as the Chinese economy slowed. Producers including Indonesia and Thailand, the world's biggest exporter, are seeking to stem the decline by restricting shipments and reducing growing areas.

An expansion of plantations across Southeast Asia from 2004 to 2011 caused a supply surplus from 2011 through 2016, according to the Singapore-based International Rubber Study Group. The glut is poised to drop to 51,000 tonnes next year from 77,000 tonnes in 2015, it said in January. 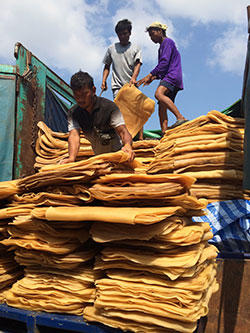 Inventories monitored by the Shanghai bourse slid 2.6% last week to 134,309 tonnes, the lowest since October 2013 and a sixth weekly decline, exchange data showed Friday. Chinese imports of natural rubber rose 24% to 220,444 tonnes in March from the previous month, according to customs data.

Shrinking stockpiles are easing concern that an economic slowdown in China, the world's biggest consumer, will weaken demand, according to Shigemoto.

China's central bank cut the amount of cash lenders must hold in reserve by the most since November 2008 after the economy expanded at the weakest pace since 2009 last quarter. A manufacturing gauge fell to a 12-month low in April.

Agriculture Minister Pitipong Phuengboon Na Ayudhaya said on Thursday the country, the largest producer and exporter, plans to cut down its rubber growing area by 1 million rai next fiscal year.

Thai and Indonesian shippers have also agreed not to renew contracts with dealers who deliver rubber on the Singapore Exchange because of low prices, according to the Thai Rubber Association.