Shares also on slide as investors pull back

A Bangkok Bank teller counts baht notes at a branch in the capital. The Thai currency on Tuesday sank to 33.74/33.79 to the US dollar, its lowest level since September 2009.

The baht on Tuesday plummeted to its lowest level in nearly six years, while the stock market erased this year's gains as foreign investors shunned local assets on worries over Thailand's economic health.

"Currencies in Asia have fallen against the dollar, but the magnitude of the baht's pullback is faster and higher than its regional peers," a Thai bank dealer said.

The baht has slipped sharply since the Bank of Thailand's rate-setting committee surprisingly cut its policy rate by a quarter-percentage point for a second straight meeting on April 29.

The central bank described the unexpected cut to 1.5% as harsh medicine to ward off downside risks to growth as exports contracted in the first quarter and public spending faced delays.

Another currency dealer said the baht would remain biased downside and was expected to hit 34 against the dollar soon. 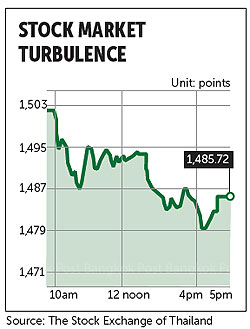 Foreign investors yanked 1.2 billion baht out of the market yesterday.

China's decision to cut its interest rate for the third time in six months on Sunday reinforced the view that the world's second-largest economy is cooling down and growth could be lower than 7% this year.

The downward trend in the stock market is expected to continue this week, but investors can buy selectively when the bourse falls below 1,480 points.

Meanwhile, the SET on Tuesday announced it would modify criteria on the selection of SET50 index and SET100 index constituents by considering trading volume in addition to the current methodology, effective from next month's periodic review.

The SET will also improve the calculation of its total return index from July 1.

Constituents of the SET50 index and SET100 index will be selected from the top 200 stocks in terms of market capitalisation. The stocks' free float must be at least 20%.