The Bank of Thailand is asking financial institutions to ensure its latest policy rate cut helps to ease businesses' borrowing costs and debt repayment pain amid the sluggish economy.

"I have asked banks for their cooperation in passing on our relaxed monetary policy to citizens," central bank governor Prasarn Trairatvorakul said. 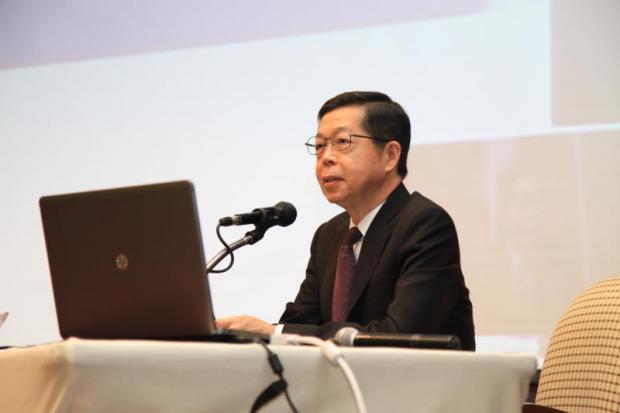 At the end of April, the central bank's Monetary Policy Committee (MPC) unexpectedly cut the policy rate by 25 basis points to 1.5% to alleviate economic effects, the second cut this year.

In times of a slow economy, the central bank can implement policy only through the benchmark interest rate and depends on commercial banks to pass on the effects to businesses and consumers, Mr Prasarn said.

The MPC's cut late last month was a pre-emptive move to mitigate the economic slowdown, but commercial banks have yet to follow suit in lowering their interest rates for lending due to doubts about the debt repayment ability of business operators and consumers.

In addition, non-performing loans (NPLs) in the SME and consumer lending segments increased in the first quarter.

Some commercial banks did cut their rates in line with the Bank of Thailand's first interest rate reduction on March 11, but this time none has yet done so due to business-related reasons, plus they feel their current rates are still relatively low, Mr Prasarn said.

He reiterated that the central bank was not demanding that banks lower their interest rates but rather "fine-tune their opinions among themselves".

Mr Prasarn made his request to commercial banks while meeting in Bangkok yesterday with executives from local financial institutions.

The meeting was held to exchange views on present economic conditions, find ways to enhance the effectiveness of monetary policy and discuss a five-year plan to develop the banking sector.

However, the central bank did not ask commercial banks to increase their loan-loss reserves since they had already set aside their usual reserves against bad loans, Mr Prasarn said.

The central bank last Wednesday sent around a circular to financial and non-bank institutions engaged in credit-card business asking for their cooperation in supporting four main SME groups — those affected by present economic conditions, new business operators, firms with growth capabilities and those planning to expand into Asean and other foreign markets.

Possible measures that could support these SMEs during the slower than expected economic recovery include consideration of more lenient repayment terms, lower interest rates on loans and debt restructuring, the statement said.

It said another measure was to consider reducing the minimum payment on credit-card debt shouldered by SMEs that use credit cards for business purposes.

That measure could allow instalment payments of less than 10% of the outstanding balance, which is subject to discretion of financial and non-bank institutions engaging in the credit-card business until June 30.

Boontuck Wungcharoen, chairman of the Thai Bankers' Association (TBA), said after yesterday's meeting that banks' interest rate cut would be based on market forces and would take some time after a policy rate reduction.

Even if the benchmark interest rate remained unchanged, banks could cut lending rates to mitigate the financial burden of SMEs on a case-by-case basis.

"The banking industry did follow the policy rate earlier, and further action [by banks] will take more time after this latest round and should be in line with market forces," Mr Boontuck said.

The proportion of bad SME loans increased to 3.3% in the first three months of this year, up from 3.11% in last year's fourth quarter, with a value of 149 billion baht, central bank data show.

In this year's first quarter, SME NPLs in the overall banking system increased in line with economic circumstances but remain manageable.

SME loan expansion in the system also improved, with growth of 4.5% year-on-year.

Mr Boontuck said the TBA would work with the central bank on regulatory relaxation as a next step, as banks might need additional reserves for new debt restructuring measures.

Siam Commercial Bank president Arthid Nanthawithaya said rate cuts were not the only measure to help SMEs, but SCB would consider adjusting its interest rates following the second policy cut.

However, KBank booked lower loan yields under the assistance measures.

Demand for debt restructuring from this customer segment is expected to continue amid the present economy but in lower numbers than before.

Recently KBank could expect 100 SME customers a month to ask for debt restructuring, but the number is expected to decline to 20, Mr Patchara said.

Meanwhile, the TBA yesterday hosted a meeting of bank chief executives regarding the five-year strategic plan that starts this year. Digital banking is a main strategy, as it will save a significant amount in operating costs. 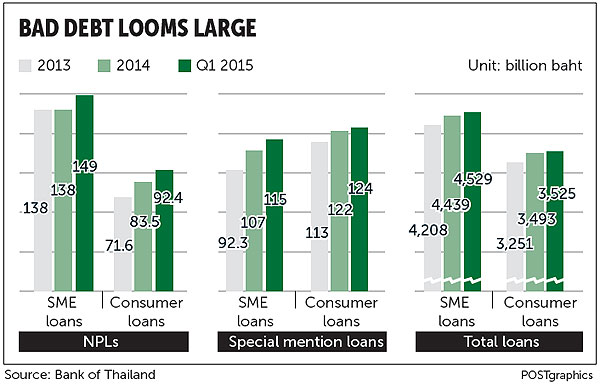