AIIB expects to be operational by year-end
Business

AIIB expects to be operational by year-end

SINGAPORE — The China-backed Asia Infrastructure Investment Bank said on Friday it expected to be operational by the end of this year, after a three-day meeting of prospective member nations in Singapore.

AIIB said the meeting finalised the Articles of Agreement, which are expected to be ready for signing by the end of June. 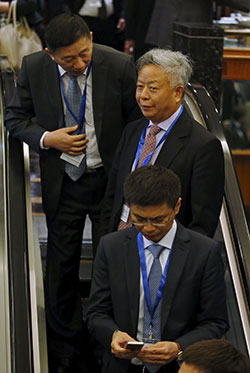 China will likely take a 25-30% stake in the bank and India is likely to be the second-largest shareholder, delegates attending the meeting said earlier.

China's share in the US$100 billion lender will be less than 30%, an Asian delegate attending the meeting in Singapore told Reuters. A second delegate said India's share will be between 10-15%. Both spoke on condition of anonymity.

In all, Asian countries will own between 72-75% of the bank, while European and other nations will own the rest.

A third delegate said the talks have ended and now each country representative would take the proposals back to their governments for a final decision.

There was no immediate comment from the AIIB or Chinese officials on the discussions in Singapore.

A total of 57 countries have joined AIIB as its prospective founding members, throwing together countries as diverse as Iran, Israel, Britain and Laos.

The United States and Japan have stayed out of the China-led institution, seen as a rival to the US-dominated World Bank and Japan-led Asian Development Bank, citing concerns about transparency and governance -- although Tokyo for one is keeping its options open.