The red flag slapped by the International Civil Aviation Organization (ICAO) on Thailand's aviation safety supervision on Thursday may result in a further backlash to the industry.

It could mean several more countries will be under pressure to put flights operated by Thai-registered airlines to their airports under closer scrutiny or even curb them, Thai officials and airline executives said Thursday.

"What we're gravely concerned about is more countries coming to clip our wings since our image is made worse by the red flag," a senior executive of one Thai airline operating on international routes told the Bangkok Post.

There is a risk the Japan Civil Aviation Bureau may lift its reprieve, now set to end next month, that allows airlines such as Thai AirAsia X to operate flights to Sapporo.

Similarly, South Korea and China could tighten restrictions on Thai airlines' flights to their airports beyond regular scheduled services that they allowed before the ICAO put out its yellow card.

The UN agency in charge of global aviation standards on Thursday publicly flashed a red flag at Thailand after the country failed to meet the deadline for corrective action.

Thailand is one of 13 countries including the likes of Botswana, Haiti and Angola to be red-flagged by the ICAO among 187 whose aviation standards were audited.

The move came as a complete surprise to the Thai aviation industry, with Transport Minister Prajin Juntong suggesting on Tuesday that the ICAO had agreed not to post any information over Thailand's shortcomings on its public website.

He said then that the ICAO was satisfied with progress on "corrective action plans" made so far by Thailand to address "significant safety concerns" raised by the agency.

Thai officials and airline executives with knowledge of the issues told the Bangkok Post that the misleading information given by the minister was due to miscommunication and misinterpretation of the statement given by top ICAO officials to a Thai delegation, led by Deputy Transport Minister Arkhom Termpittayapaisith, who visited the ICAO's Montreal office just ahead of the deadline to seek reprieve.

However, the ICAO's concerns were displayed online in compliance with its guidelines when Thailand failed to beat the deadline for satisfactory correction.

The agency is required to reveal the information publicly 90 days after a state is unable to correct flaws identified in its audit.

The ICAO showed a yellow card to Thailand after an audit in January when the Civil Aviation Department scored very poorly.

It expressed grave concerns about lapses in personnel licensing and training, airworthiness assessment and certification, airline operations oversight and issues involving the granting of operator certificates to airlines.

Charamporn Jotikasthira, Thai Airways International president, sought to downplay the possible impact of the red flag to reassure the travelling public the national airline operates with the highest safety standards in all operational areas.

"Significant safety concerns do not necessarily indicate a particular safety deficiency in the air navigation service providers, airlines, aircraft or airports, but rather indicates that the state is not providing sufficient safety oversight to ensure the effective implementation of applicable ICAO standards," he said, quoting the ICAO website.

Alan Polivnick, of international law firm Watson Farley & Williams (Thailand), said the red flag did not appear to be a formal downgrade to Category 2, which would severely affect Thai airlines operating to foreign countries, but a lesser sanction. 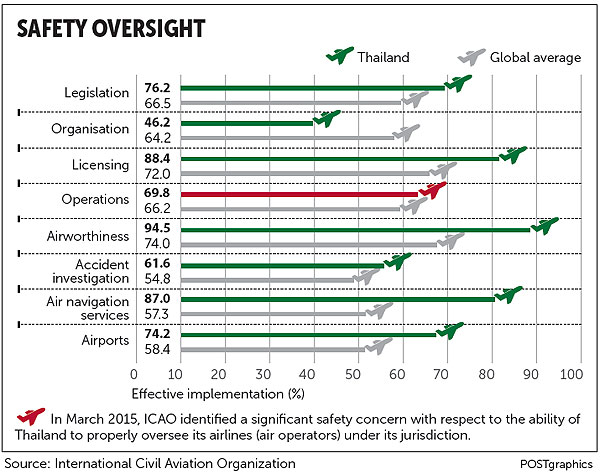