Workers rallied to demand a rise in the minimum wage and price controls on basic goods, but Prime Minister Prayut Chan-o-cha waved away the demands as unrealistic. (Post Today photo) 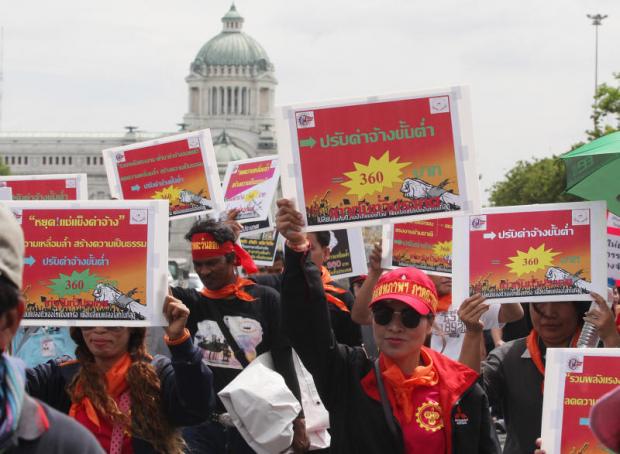 Labour networks gather at the Royal Plaza before marching to Government House to submit a petition to Prime Minister Prayut Chan-o-cha, demanding an increase in the daily minimum wage from 300 baht to 360 baht nationwide. Thiti Wannamontha

He was speaking Thursday after a meeting with the Policy Committee on the Special Economic Development Zone.

Earlier, labour groups led by Wilaiwan Sae Tia, president of the Thai Labour Solidarity Committee (TLSC), gathered at the Royal Plaza to press their demands, and later proceeded to Government House to submit the wage rise petition to the prime minister.

Gen Prayut said he wanted labour networks to understand the country's situation rather than put pressure on him for a wage rise, or urge workers to stage protests.

"I have told them before that workers have to undergo a competency assessment at the Labour Ministry to seek their own appropriate wage rates depending on the abilities of each worker," the premier said.

"I wanted to ask how many workers we have nationwide.  If I approved the minimum wage hike to 360 baht, how much money will we need?

"We cannot solve the problem with money only. Strength must be built from inside to address the root cause," he added.

Ms Wilaiwan said a minimum wage of 360 baht would meet many workers' daily costs of living such as utilities, travel and food expenses, according to a recent labour survey.

"We would like the government to control commodity prices as well, as they are constantly going up with the result that 300 baht is not enough to sustain workers' lives," Ms Wilaiwan added.

Ms Wilaiwan said the government and a remuneration committee should finalise the pay rise issue by October and implement the policy next year.

She said the existing measure in which wage calculations are based on living costs in each province is unfair for workers, adding the new wage must be applied to workers nationwide.

The TLSC president said her group will work with labour networks in each province to submit a statement to their provincial governors.

The 300-baht minimum daily wage was enacted during the Yingluck Shinawatra administration and has been in place for almost three years. Critics say it is no longer keeping pace with the cost of living for most workers, with the exception of new, unskilled entrants to the labour market.

The groups said the current minimum wage policy should apply only to unskilled workers with less than one year of experience.

The ministry should devise a legal mechanism to force employers to adopt a clear pay structure with mandatory annual pay rises for workers, they said.

Earlier, the National Institute of Development Administration (Nida) studied a number of options to address the calls for wage hikes, and the results will be submitted to the wage committee this month.