Visitors check out the many offerings at LED Expo Thailand in late May in Bangkok.

The need for energy conservation worldwide is undeniable but success varies from country to country. Those that face energy shortages are forced to adapt, often with innovative solutions, but in some countries where energy is freely available, conservation can be a tougher sell.

In Thailand, where 99.7% of the population has access to electricity, conservation is widely preached but not always practised. That could explain why adoption of LED lighting has been slower than in some countries.

However, LED lighting manufacturers are optimistic that demand for their products will grow as prices come down. The market certainly has room to grow: a lighting consultant with Laster Tech Company estimated that LED products account for fewer than 20% of the 4-5 billion lightbulbs in use.

"If Thailand is able transform lighting in the entire country into LED, it could save about 5-6 billion baht yearly," said Energy Minister Narongchai Akrasanee.

"LED is not a new thing but it is a very important revolution. With the help of LED, Thailand should be able to reduce electricity consumption up to 25%, which is the goal we are aiming for in the new electricity-generation plan for the next 20 years."

The Electricity Generating Authority of Thailand (Egat) has been promoting the adoption of LED lighting for the last three years. It installed LED lighting at about 40 Egat-owned properties between 2012 and 2014. As well, it has converted about 8,000 street lights to LED, saving 6.4 million units (kilowatt/hours) of electricity worth about 10 million baht.

Around 40 projects initiated by His Majesty the King also use LED products, which have helped to reduce their electricity bills by about 300,000 baht annually, according to data presented by Egat at the recent LED Expo in Bangkok.

"Egat led the campaign to change incandescent bulbs to fluorescent for 20 years. Today, we see that it is the right time for another transition to LED," said Egat governor Soonchai Kumnoonsate.

"[Egat] has always promoted energy saving as its priority agenda by managing the demand side in three areas: encouraging the use of energy-saving equipment, the construction of green buildings, and the generation of awareness about saving energy."

The state utility's best-known programme is the No. 5 label which denotes electrical products that it has certified for energy efficiency. 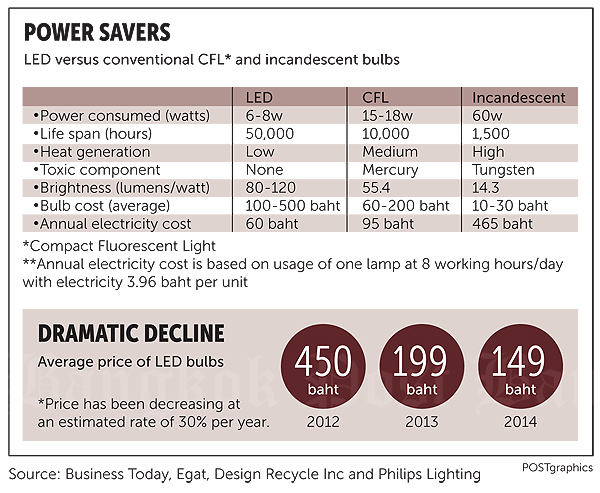 To promote the adoption of LED technology, Egat has teamed up with six LED bulb manufacturers on a "yellow box" programme that offers subsidised prices in Egat-designed packaging.

Under the programme, a 5-watt LED bulb costs 115 baht and a 7W unit costs 125 baht compared with market prices of about 180 and 200 baht respectively. Though the price is still higher than that of compact fluorescent bulbs, the cost-efficiency of LED bulbs is far superior.

On an annual basis, the transition from a compatible 40W incandescent bulb to a 5W LED bulb reduces electricity cost by 87.5%, which works out to 401.71 baht per year per bulb. If you have 20 bulbs in your home, that's a saving of more than 8,000 baht a year.

To put it another way, one 5W LED bulb consumes around 60 baht worth of electricity per year, compared with 95 baht for fluorescent and 465 baht for incandescent. The calculation is based on eight working hours per day and electricity at 3.96 baht per unit.

Back in 2010, LED products constituted about 12% of the whole Thai lighting market. This year the figure is expected to reach 40-50%. Growth will be driven by demand from individual consumers, private companies and government projects, and is expected to increase by 30% to 3.82 billion baht, according to Egat.

However, LED affordability remains the main barrier to wider use.

"Thailand is a price-sensitive market. People will go for pricing first before they consider other factors. The entire industry is price-driven, yet people want to have a world-class product. So it's very challenging," said Tan Chin Kong, senior vice-president of NationGate Solution (M) Sdn Bhd, a Malaysian contract manufacturing services company that also engages in LED production.

Many local distributors have responded to consumer demand by importing low-priced, low-quality products from China. However, Mr Tan sees that as an opportunity to tap into Thailand's higher-quality LED market.

"Over 80% [of LED bulbs] are imported mainly from China, meaning that 20% are from local sources," he said. "As time goes by, the size of the Thai market will grow much bigger. In that regard, the growth opportunity and the potential is definitely there.

"Malaysia, as a neighbouring country, certainly wants to share the pie because Thailand is definitely one of the growing markets and opportunities are huge."