Forty years ago, it took a young New Zealander 18 months to save up to afford a plane ticket from his hometown to London. He's still flying today, travelling the world in search of rich dreams.

Gavin Faull has been living out of a suitcase ever since he decided to join a consulting firm in Hong Kong back in 1973, when he first decided to move away from his comfort zone back home in New Zealand.

"I started to travel when I had nothing. You don't need a rich pocket to travel, you just need to have a rich brain, and that's life," the 67-year old Kiwi told Asia Focus as he relaxed in a dining room at the Swiss-Belhotel Tuban, his newly opened four-star affordable luxury hotel in Bali. "If you have a rich brain, you can do anything."

His first career in Hong Kong helped pave the way for his life-long journey in the hospitality industry — from being a financial controller with the Peninsular Group to joining Australia-based Kingsgate International as chief executive.

Now, as chairman and president of Swiss-Belhotel International, headquartered in Hong Kong, Mr Faull leads a company that provides professional management services for hotels, resorts and serviced residences across the world.

Founded in 1987, Swiss-Belhotel follows a unique management philosophy that involves working with owners as a partner to maximise their returns without changing their local cultures and traditions.

"We pick managers for their ability to understand the culture and work with the local people in the area," he explained. "We're a global hotel company with a local flavour. We adapt to our owners, local cultures and the surrounding environment."

Reflecting Mr Faull's determination to make a mark on the world, Swiss-Belhotel is now recognised as one of the fastest-growing hotel management groups in the world. 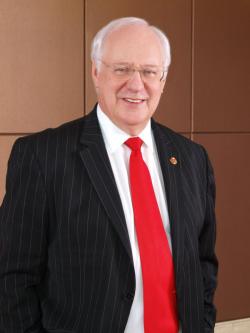 "We have to make our hotels exciting and different. We need to think outside of the box," says Gavin Faull, chairman and president, Swiss-Belhotel International.

It currently has 49 operating hotels with 7,415 rooms, and 64 properties under development, comprising 11,957 rooms spanning Asia, Australasia, Europe and the Middle East, all expected to be completed by 2020.

Of the projects in the pipeline, 19 are outside of Indonesia including four in China, two each in Vietnam, the Philippines, Malaysia and Saudi Arabia and one each in Iraq, Oman, Georgia, Qatar, Australia, Bahrain and Fiji.

"When you leave this world, your pocket is about the same size as when you came into this world. But you can leave a lot behind. That's what life is all about: leaving things behind for the next generation," he said.

With that in mind, Mr Faull keeps adding his property portfolio to ensure that all levels of sophistication and customer needs are truly met.

Realising the potential of the budget hotel market, he established Zest to differentiate itself from other Swiss-Belhotel brands. Zest is a two-star designer hotel offering many of the group's distinctive colour schemes, room and furnishing designs.

"All the other brands in our group, you feel Swiss-Belhotel but you don't actually physically see Swiss-Belhotel," he said, adding that Zest offers cost efficiency and a greater opportunity to sell in the mass-budget market.

"The budget airlines are taking off, so too are budget hotels," he said. "As we tighten our Zest brand and its specifications, we will be taking Zest Hotel to Australia and New Zealand, to Europe, Asia and the Middle East."

One of the hallmarks of Swiss-Belhotel is the notion of passion and professionalism. From the small on-the-ground staff to his top management team, Mr Faull has tried to ignite the fire of passion within the organisational culture to deliver services that exceed anyone's expectations.

He pointed to the neatly aligned tables and utensils in the dining area. "See? That's professionalism, but it's not passion. There are no people there yet. There are no hearts there yet, not until the people come in.

"When the staff come and feel that they want to serve the customers and make them happy, that is passion and passion comes from love. Simple."

While many others in the business world in their sixties may be winding down toward peaceful retirement, Mr Faull shows no sign of slowing down. His mind remains filled with innovative ideas and upbeat thoughts of further expansion.

"My plan is really to expand outside of Indonesia," he said, adding that more than half of the group's properties are in Indonesia. "Indonesia is almost at a saturation point for us. We're now looking at expanding to other areas including the Middle East, Europe, Asia Pacific and Indochina.

According to Mr Faull, Indonesia is facing challenges at the moment as it tries to restructure and modernise its economy and provide more opportunities for its people to prosper.

While Mr Faull and Swiss-Belhotel are not afraid of dreaming big, they're not planning to conquer the world overnight. "We have to prioritise our focus — there are so many opportunities in the emerging economies with such huge population bases," he said.

"We are now prioritising Thailand, Vietnam, and Cambodia. We have to make our hotels exciting and different. We need to think outside of the box."

In his view, the frontier markets in Asia are the economic engine room for the global tourism industry, especially with the Asean Economic Community (AEC) just around the corner.

He noted some challenges to the hospitality industry in frontier markets as the rising cost of labour and operation will continue to dictate how the company develops. These markets are attractive, but thorough risk assessments are crucial for success.

For example, the company needs to take into account the strength of government support for the tourism industry, as well as how much it allocates education, infrastructure, road networks and airports.

As tourism and business prosper, opportunities for the hospitality business are growing very rapidly, but sitting and waiting for opportunities to come to him is far from Mr Faull's management style.