May recovery slow and fragile despite rate cuts

Thailand's economic recovery in May continued at a slow and fragile pace despite two successive rate cuts, while global economic uncertainty and the local drought pose further downside risks to growth, says the Bank of Thailand.

She said China's slower than expected growth could affect the Thai economy, while financial markets had absorbed shocks stemming from Greece's debt situation to some degree. 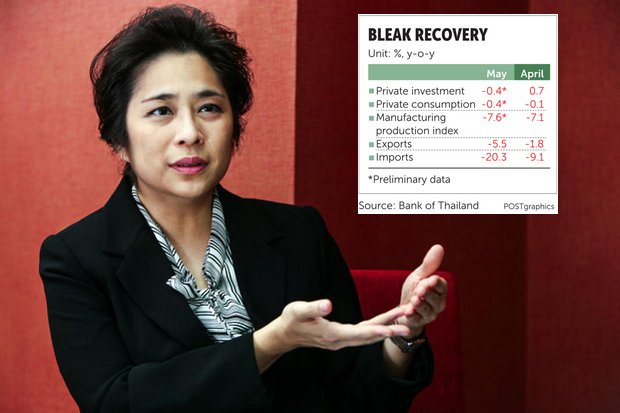 Thailand will reap benefits if the global economy picks up, but the country should improve its production to tap global demand at a higher rate, Mrs Roong said.

She said since it had been only about two months since April's rate cut, it would take time for the transmission effects from the central bank's monetary policy to yield clearer results on the economy.

The Monetary Policy Committee kept its policy interest rate at 1.5% on June 10 after making two consecutive cuts by 25 basis points each in March and April.

The central bank recently trimmed its GDP forecast for this year to 3% from 3.8%, predicting shipments would shrink by 1.5%.

The Finance Ministry's Fiscal Policy Office (FPO) is set to cut its growth forecast again this month due to weaker than expected exports in May, the worst drought in more than 10 years and lukewarm domestic consumption, although the new estimate is unlikely to dip below 3%.

Though the central bank's baseline projection forecasts effects from the drought to be minimal, if rainfall slows and water in the dams becomes depleted, farmers may run low on irrigation water, affecting crop production and farm incomes, Mrs Roong said.

She said further study had to be made in case the drought extends beyond November concerning its correlation with deflationary effects.

The FPO estimates the El Nino weather phenomenon will shave 0.15 percentage points off GDP this year, well below Finance Minister Sommai Phasee's recent projection that the drought would cut economic growth by half a percentage point.

The private consumption indicators fell by 0.4% year-on-year in May after a 0.1% contraction a month earlier.

The private investment indicators contracted by 0.4% year-on-year in May, down from April's 0.7% growth.

May's manufacturing output dipped further by 7.6% year-on-year compared with a 7.1% contraction in the previous month.

Exports declined by 5.5% year-on-year in May, down from April's 1.8% contraction, due mainly to the slowdown in the Asean and Chinese economies, while major partners Europe, Japan and the US remained fragile.

Imports dropped by 20% year-on-year in May after a 9.1% contraction in April.

"There were some positive drivers for Thailand's economic growth that showed up in the numbers such as tourism, public spending and consumption in the service sector," Mrs Roong said.

The fate of the US economy depends on the course of the pandemic and the Covid-19 vaccine rollout, but the outlook is nonetheless "highly uncertain," the Federal Reserve chair said.