By year-end, country to have more solar power capacity than all of SE Asia combined

Employees of a solar farm company take notes between panels at the farm in Nakorn Ratchasima province in this 2013 file photo. Come December, Thailand will have more solar power capacity than all of Southeast Asia combined. (Reuters photo)

Come December, Thailand will have more solar power capacity than all of Southeast Asia combined as record sums of money are poured into the sector in the hopes of nurturing a new energy source to help drive the region's second-biggest economy.

Thailand has been shifting from natural gas with once-plentiful reserves are expected to run out within a decade, forcing it to rely on imported fuel more than any other country in the region except Singapore. A plunge in solar-component costs and subsidised tariffs have also helped feed the country's solar boom.

About 1,200-1,500 megawatts of solar capacity will be connected to the grid this year, requiring as much as 90 billion baht of investment, Pichai Tinsuntisook, chairman of the Federation of Thai Industries' renewable energy division, told Reuters.

Thailand's solar capacity will rise to 2,500-2,800 megawatts this year from about 1,300 MW in 2014. That is almost six times more than the capacity added last year. The new capacity, while modest compared to Japan or Germany, will turn Thailand into the first significant solar-power producer in a region where the sector has barely taken off.

"Thailand has strong potential for both solar farms and rooftop solar systems," said Sopon Asawanuchit, managing director of advisory firm Confidante Capital, adding that its location in the sunny tropics is an advantage. 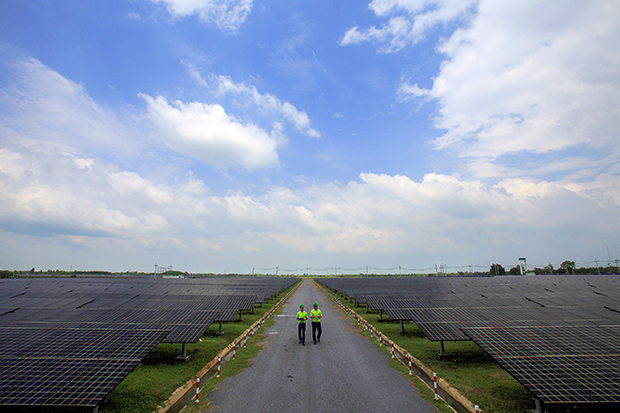 Employees of a solar farm company walk between panels at the farm in Nakorn Ratchasima province in this October 2013 file photo. (Reuters photo)

While the bulk of the power will come from solar farms, rooftop solar panels may have enough capacity over the next five years to supply as many as 250,000 households in urban areas, renewables analysts say.

Thailand aims to increase its solar capacity to 6,000 MW by 2036. That would account for 9% of total electricity generation, up from 4 percent in 2014, and be able to meet the electricity needs of up to 3 million households.

Despite Southeast Asia's solar potential -- thanks to abundant sunshine -- Thailand is largely alone in boosting its capacity to harness the sun's energy.

That's because its neighbours either have ample supplies of other energy sources such as oil, gas or geothermal power, or their governments lack the budget to invest in new technology and to support the sector with subsidies.

The Philippines is starting to prepare similar plans, though it is still in the early stages.

The Thai government is supporting the country's solar sector with feed-in-tariff subsidies of up to 6.85 baht per kilowatt-hour paid out over 25 years to energy producers. 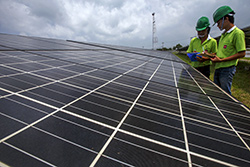 Employees of a solar farm company take notes between panels at the farm in Nakorn Ratchasima province in this 2013 file photo. (Reuters photo)

"Sunlight is free," said Jormsup Lochaya, chairman of Bangkok-listed Superblook PCL, which has set a budget of 30 billion baht to invest in solar energy this year.

"We have no (ongoing) material cost and no problem with staff expenses because the project needs about three staff to monitor," he said.

Kessara Tanyalakpark, executive director of property developer Sena Development Plc, agreed and added that solar has the lowest risk while other renewables such as garbage or tapioca may face unstable raw-material costs.

Sena is among the latest companies diversifying into the solar business as the domestic property market slows in line with a sluggish economy.

Shares in companies which aim to invest in solar power have outperformed the overall Thai stock market this year. Among them are Sena, Superblook, Gunkul Engineering and Communication and System Solution.

Despite the current boom, some investors are worried solar power may be used as an excuse for some retail punters to speculate in the stock market, the Federation of Thai Industries' Mr Pichai said.

He said some listed companies had also bought solar farms only to sell them later following gains in share prices due to the acquisitions. 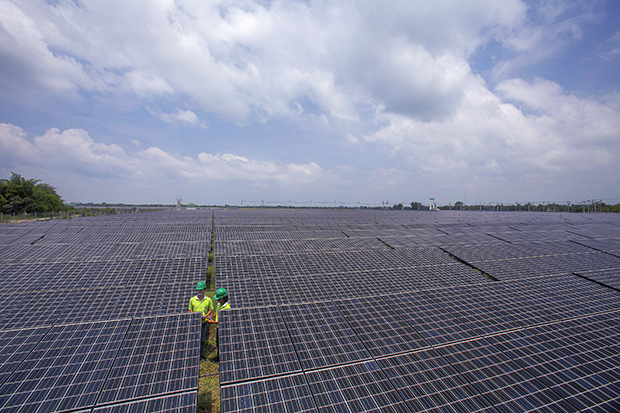 Employees of a solar farm company take notes between panels at the farm in Nakorn Ratchasima province in this 2013 file photo. (Reuters photo)