A farmer walks in a dry rice field in Suphan Buri province July 10. In the central province, farmers are becoming increasingly desperate for water to irrigate their parched fields as the rice-producing nation suffers its worst drought in more than a decade. (Reuters photo)

Drought linked to the weather pattern will cut Thailand’s main rice harvest to the lowest in nine years. Soybeans sown in the past two weeks in India may be pulled out of the ground without immediate rain, and the outlook is cloudy for Asian palm oil. Australia’s wheat crop may decline.

El Nino risks disrupting harvests worldwide by reducing rainfall in Australia and altering patterns across South America as well as baking parts of Asia. Central Thailand is the driest in more than 20 years and India's monsoon is heading for the first back-to-back shortfall in three decades. The inflation- boosting effect of the first El Nino since 2010 also poses a risk to the global economy, Citigroup Inc says.

"A price spike could be caused by strengthening of El Nino and worsening of rainfall," said Wayne Gordon, an analyst at UBS Group AG in Singapore, referring to food costs. Weather patterns in the next two months are critical, he said.

El Nino is set to last until 2016 and some data patterns are similar to the record 1997-98 event, according to weather forecasters in Australia and the US. The event is a risk for grains in Asia and Central America and global rice output will be less than previously forecast, the United Nations predicts.

Smaller crops in Asia may help arrest the decline in world food prices that last month reached an almost six-year low amid ample global supply, according to a UN index. Rice, the staple for half the world, sank to the lowest since 2006 in May. Wheat fell to an almost five-year trough the same month.

Weather disruptions linked to El Nino can already been seen, HSBC Holdings Plc said in a report on Wednesday, citing drought and typhoons. Asia is well positioned to deal with a strong El Nino due to price buffers, abundant reserves of key commodities and subdued inflationary pressures, it said. 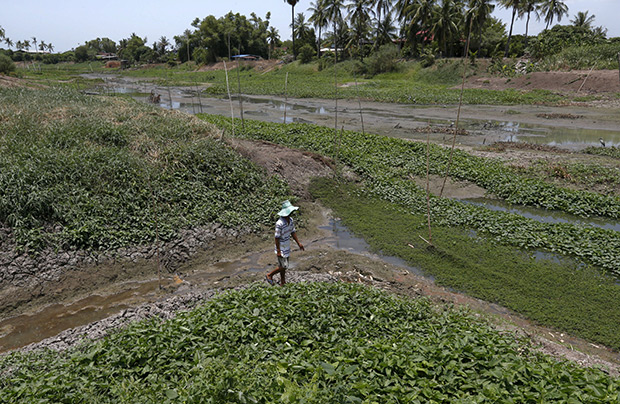 Thai rice output from the main harvest starting in September may slump 14% to 23.3 million tonnes, the lowest since 2006, according to data from the Office of Agricultural Economics. The harvest accounts for about 70% of annual production in the world's top exporter.

"Drought this year is quite severe," said Supaporn Bongsunun, director at the Centre for Agricultural Information. El Nino-induced dryness will lower yields and farmers may curb planting amid unattractive prices, she said.

The pattern may boost palm oil prices to 2,500 ringgit a tonne this year, according to Mohd Emir Mavani Abdullah, chief executive officer of Felda Global Ventures Holdings Bhd, the largest producer. Prices were at 2,189 ringgit on Wednesday, down 3.4% in 2015 as investors weigh the weather outlook. 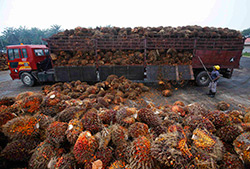 A worker unloads palm oil fruits from a lorry inside a palm oil factory in Salak Tinggi, outside Kuala Lumpur. Palm oil production in top growers Indonesia and Malaysia are worried about the potential El Nino. (Reuters photo)

Recently sown soybeans in India need rain this week or farmers will need to replace them with lentils, according to VS Bhatia, director of state-owned Directorate of Soybean Research. Dry weather has tempered optimism earlier this season, when rain prompted farmers to plant the oilseed almost a month earlier than in 2014.

Rainfall between July 1 and 12 was almost 30% below normal, weather bureau data show. Below-average rain may also affect the peanut crop in Gujarat, India's largest producer, according to KK Singh, head of agriculture meteorology at the weather bureau.

"Rains in July and August are crucial for the overall agriculture situation," Siddharth Kothari, an economist with Sunidhi Securities & Finance Ltd, said by phone from Mumbai on July 14. "There will be impact on yields if rains fail as sowing has already taken place."