The average occupancy rate of office buildings in Bangkok hit an all-time high of 92.6% in the second quarter, according to market consultant Knight Frank Thailand. (Bangkok Post photo)

Despite the pall hanging over the economy, office occupancy rates in Bangkok have surged to a record.

Analysts say the sector is likely to see more upside due to a stubborn lack of new supply and keen interest from foreign firms to set up shop in one of the cheapest cities in Southeast Asia.

The average occupancy rate of office buildings hit an all-time high of 92.6% in the second quarter, according to market consultant Knight Frank Thailand. The greatest growth was seen in prime office spaces in areas outside the central business district, while the highest occupation rate was seen within.

The formation of a single regional market in Southeast Asia by the year-end is driving foreigners to open offices in the capital, whose geographical location offers quick access to fast-growing emerging markets in Myamnar, Laos and Cambodia.

Demand for Bangkok office space has also risen since late last year as politics have stabilised. The government has since approved both tax and non-tax incentives to spur multinational companies to set up regional headquarters in Thailand.

But supply is increasingly scarce and a shortfall looms. Developers prefer to build condominiums in prime locations, as that is more profitable than building office blocks.

Supply of modern offices is also lacking. The majority of office buildings in Bangkok are old, and landlords balk at the cost of renewal. Just 14% of offices are under 10 years old, according to real estate firm CBRE.

The supply constraints have squeezed Bangkok rental rates since 2011, with some rentals as high as 1,200 baht per square metre. But that is still cheaper than Singapore or Jakarta.

"Demand for offices for rent in Thailand, especially in Bangkok, remains strong over the next few years because of the formation of the Asean Economic Community," said Nalinee Ngamsettamas, chief executive officer of Bangkok-based advisory firm AIRA Capital.

"Foreign investors are still interested in investing in Thailand because of its location." 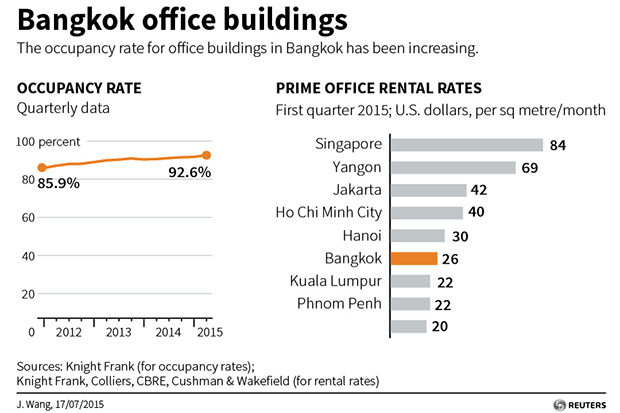