Skytrain operator BTS Group Holdings Plc plans to develop nine property projects worth a combined 43.7 billion baht this year, both by itself and through joint ventures with SET-listed developer Sansiri Plc.

Chairman Keeree Kanjanapas said BTS itself would develop commercial projects or recurring-income properties, including office and hotel as well as single-house and townhouse projects. 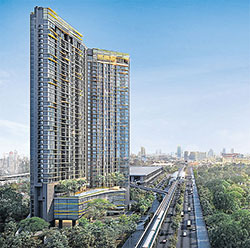 An artist’s impression of the 5.7-billionbaht Line Jatujak–Mochit condominium, the first project co-developed by skytrain operator BTS and Sansiri. The 841- unit project was sold out on the launch date in late May.

BTS's properties on hand include a 10,000-square-metre office building opposite Chatuchak Park that serves as its headquarters, three hotels under the U Hotel brand in Bangkok, Chiang Mai and Kanchanaburi, and Thana City Golf & Sports Club on Bang Na-Trat Road.

BTS also has many plots in Bangkok and in Khao Yai worth a combined 7 billion baht. The largest is a 600-rai site in Pak Chong's Pong Talong subdistrict near Khao Yai.

The second largest is a 400-rai site on Bang Na-Trat Road where it will develop single-house and townhouse projects in the future.

"For condos, we will partner with Sansiri, aiming to develop 25 projects worth a combined 100 billion baht in five years from now," said Mr Keeree.

The joint venture's first project was The Line Jatujak-Mochit, worth 5.7 billion baht. The 841-unit project was sold out on the launch date in late May with 200 units bought by buyers from Singapore and Hong Kong.

The second half of the year will see the launch of five new condo projects worth a combined 20 billion baht, comprising four sites under The Line brand on Sukhumvit Soi 71, the Wong Sawang area, a four-rai plot near BTS's Abstract condo opposite Central Lat Phrao and on Phetchaburi Soi 18. The other will be located in the inner city.

Sansiri's new condo projects from now on will be mainly developed by the joint venture, except for a super-luxury project on Wireless Road where the selling price of new condos will be over 400,000 baht per sq m, to be launched in the middle of 2016.

"For us, condo development through joint ventures with BTS is better than doing it alone," said Sansiri chief executive Apichart Chutrakul. "Until 2020 Sansiri will focus only on low-rise development."

Crowds estimated to number in the tens of thousands led by local administrators gathered in several provinces around the country on Wednesday in a show of loyalty to the monarchy.

LAGOS - Buildings were torched in Nigeria's biggest city Lagos on Wednesday as authorities shut down the economic hub, after the shooting of peaceful protesters by security forces caused international outrage.

The Defence Ministry will donate 20 mobile negative pressure cabinets to Cambodia, Laos, Malaysia and Myanmar to support their efforts to control the spread of Covid-19.