WASHINGTON - Delegates negotiating a huge Pacific free-trade agreement said they have failed to reach a final deal after several days of intense talks in Hawaii, in a setback to US President Barack Obama.

But US Trade Representative Michael Froman, in a statement on behalf of the 12 countries involved, insisted that "significant progress" had been made on the Trans-Pacific Partnership (TPP) agreement.

"After more than a week of productive meetings we've made significant progress and will continue on resolving a limited number of remaining issues, paving the way for the conclusion of the Trans-Pacific Partnership negotiations," said Froman. 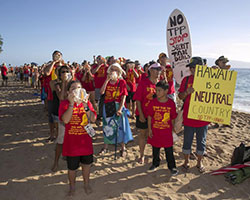 Protestors gather on the beach near the hotel where the Trans-Pacific Partnership meeting is being held in Lahaina, Maui, Hawaii, on Wednesday. (Reuters photo)

The negotiators were "more confident than ever that TPP is within reach," he said, adding that the Pacific Rim countries involved would continue to have bilateral discussions to try and iron out their remaining differences.

The failure to hammer out the final details of the accord are a blow to Obama because it means the TPP could become election fodder as the United States gets set to enter election season.

The TPP is the most ambitious trade deal in decades, a vast free-trade bloc encompassing 40% of the world's economy and part of Obama's much-vaunted "rebalance" towards Asia in the face of an increasingly assertive China.