Away from the family snack empire, Jumpoth Ruayjaroensap pursues his passion behind the camera, creating his own films and championing the work of others.

Different editions of Koh-Kae bags are displayed in wooden frames on a shelf in the fifth-floor executive cubicle. Colourful peanut cans are arranged neatly underneath the glass tabletop next to a small side table bearing an old-fashioned lamp.

Our guest appears in a business suit but promptly takes off the jacket and switches back to his leather jacket and slips on a sleek pair of sunglasses. An entirely new personality emerges in front of our eyes.

"I was in a meeting with my father," Jumpoth Ruayjaroensap says playfully. "Is it okay if I dress like this?"

Not that he needed his visitors' approval, but Mr Jumpoth's wardrobe switch was a signal that what he really wanted to talk about was not the family business but his true passion for film.

The family business is no small matter, though. Mr Jumpoth is from the second generation of the family that founded Mae-Ruay Snack Food Factory Co Ltd, the maker of the famous Koh-Kae peanut snacks, which is closing in on 2 billion baht in sales this year.

Relaxing on a black leather couch, Mr Jumpoth tells Asia Focus how boring he thinks it is to talk about business. In fact, he has been switching hats between managing director and film director for years.

"Life has two sides," he says. "I don't want to become an old boring businessperson who has nothing more in life than going to work, coming home, seeing my wife and taking care of my children. That's too conventional."

Still single and with no intention to be in a serious relationship anytime soon, Mr Jumpoth says he enjoys his freedom and doing what he's passionate about.

He has added a little twist to his life by doing something that is off the beaten path. Just last year, he told his father, Chookiat Ruayjaroensap, that he was visiting Europe for 10 days, but he was actually in Thailand, staying at a hotel and filming his cult trilogy Sur-Real.

"I simply had to make some kind of excuse for my absence. There wasn't any other option," he says, smiling.

Cult films, in his view, are movies that have a very special appeal to specific audiences. Strange and quirky by nature, they feature offbeat plots containing odd characters, can be controversial to an extent and firmly against the mainstream.

"When I produce and direct my own movie, it's like I'm dosing on drugs, like I'm getting high." He says enthusiastically. "It's a euphoric state in which I experience true bliss and I can feel the exhilaration in my veins."

On the movie premiere night, his father was there to watch his son's silver screen creation and he offered a surprisingly gratifying reaction. "He said he liked my movie as it was straightforward and different. But then he asked, 'When the hell did you have time to film all this?'" he recalls with a laugh.

Sur-Real gathers together three short features, each with a different theme. Victim involves a gangster, his wife and a drug-selling gang in a blackmail game; Underground tells the story of a man trying to win back his ex-girlfriend from her new love, a rich bad boy; and Love is Blindness explores the relationship between a Thai ladyboy and her foreign husband.

Unfortunately, he says, the reviews were mostly negative when the film was screened in Thailand last year. Critics seized on gratuitous nudity and inappropriate violence among other things. The director admits that although he gracefully accepted all comments, he was disheartened.

However, he soon gained back some confidence as Sur-Real started to attract notice at international festivals devoted to independent films. It won an award in Indonesia and a number of nominations at indie events in the United States.

In Mr Jumpoth's view, Thai society is very closed and limited when it comes to freedom of expression. For example, if someone wants to make a documentary about a historical figure, he or she can only portray the good side of that person because that is all society wants to see.

If a movie is related in any way to politics, people will start questioning the director about what colour shirt he wears, and whether or not he's on the same side as the current government. If a standup comedian makes fun of a public figure, he or she can be sued.

"It's not funny here. You cannot make fun of anyone high up in the ranks. We can't joke about the prime minister or the president the way people do in other countries. Society just doesn't get it," he says, frustration rising in his voice.

"Thai people are used to being told on what they ought to do. They're used to conformity. They let society decide for them what they should do," he continues, recalling the drudgery of compulsory morals and ethics classes back in high school. "Do we really need society to tell us what is good or bad? I think it's part of human instinct." 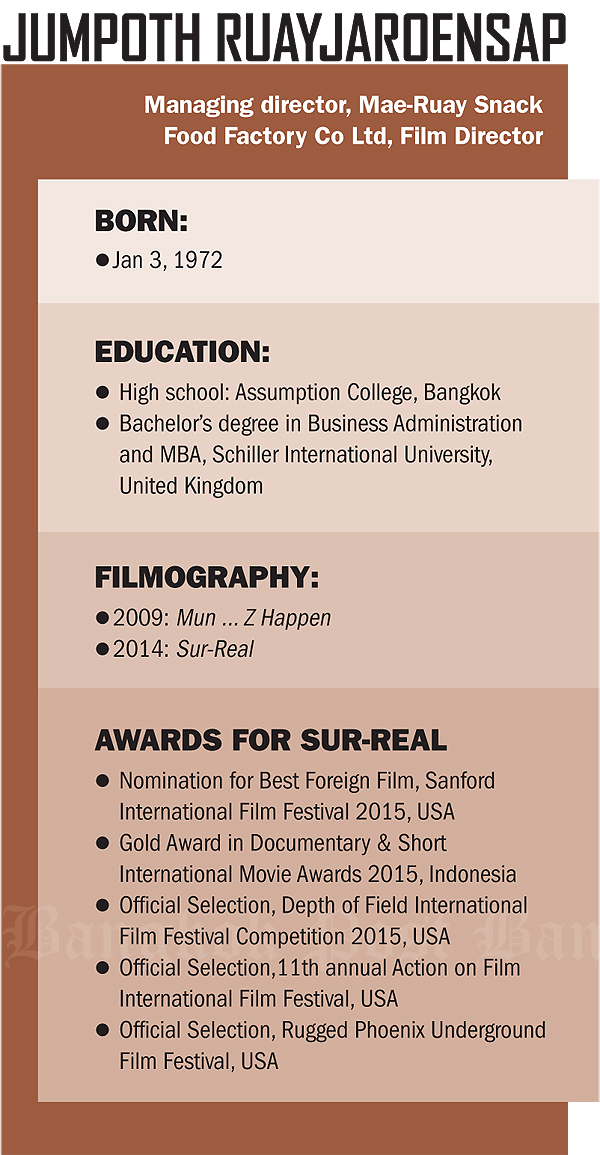 Mr Jumpoth admits he was never the most eager and diligent student. "I never liked to study," he says frankly, adding that he chose English and French for high school majors given his aspiration to speak multiple languages. Now he is picking up Japanese, adding to a repertoire that includes Mandarin, English French and Thai.

For a restless young man, the opportunity to pursue higher education abroad meant liberation. It also opened his eyes to new worlds as he travelled extensively when time permitted.

An avid history reader, he enjoys seeing how people live in different countries. Among his favorites are England and China. "They have such a long and distinguished history. It's fascinating," he says, adding that he has stacks of history books at home, which he reads regularly.

Though some say Mr Jumpoth as a typical "rich kid" who never had to try hard in life, being the heir to the growing Koh-Kae fortune is hardly as effortless as people might think.

Despite his fondness for the arts and movies, he continued his higher education in business administration, knowing that he would be called home to lend a hand to his father.

On university breaks, he recalls, his friends would come home to enjoy their young adult lives while he had to take a rain check and go along with his father's sales team early in the morning and come home at night, exhausted.

"My father asked me to come back every chance I had. He wanted me to start training from the ground up," he says. "I was wondering why I had to do all that when my friends went out partying."

His father never pushed, but made his wishes known in his usual quiet and reserved way. "He never tells me what I should or should not do. He prefers practicality. He prefers me to have hands-on experience of the job."

Today Mr Jumpoth has grown gracefully into a management position and shares company responsibilities alongside his two younger brothers. As managing director, he now looks after the overall business and the international division.

The responsibility to stay ahead of the game in the snack business means the young executive has to regularly attend social functions and surround himself with a great deal of people.

"It's really boring," he says candidly. "I will only attend those that I have to go to, and try to leave as quickly as possible.

"Meeting influential people, you have to present yourself appropriately and dress up in a suit and tie. There is always seniority to think about, and I think that's just not who I am.

"Even at the fitness club, I don't go regularly any more. Most people go there to brag how muscular and tough they are. It's nonsense.

"The people I hang out with most often today are those who work in the arts and the film industry --  producers, authors, artists, not so many businesspeople," he says, adding that the high-profile peers he sees once in a while include the author Prabda Yoon and film director Apichartpong Weerasethakul.

"I don't like crowded places. I'm more independent and my favourite time is when I'm alone. I prefer to do things alone, eat alone and stay with myself," he says.

"Now I'm happy. I have no family burden and I can invest as much as I want in movie production. I'm enjoying my freedom and I like what I'm doing."

Though his priority is to expand Koh-Kae, an even greater accomplishment in his view would be to have his own production crew and be a director for the big screen. "I wake up every day with this passion. People make fun of me for not doing any business and only making movies," he says with a laugh.

And while the rewards of business allow Mr Jumpoth to pursue his passion for moviemaking -- he has another one in the pipeline -- his resources also allow him to support other Thai independent filmmakers including Mr Apichartpong, who has achieved worldwide fame as a Cannes award winner.

Away from the office and the film set, though, there are even more worlds to explore. "I love travelling," he says. "I don't like to stay home and settled. Wealth for many people is to have nice houses and cars. Life is a journey and anywhere can be your home."