The baht sank to a six-year low Friday as a central bank move to allow domestic investors easier access to overseas markets sparked concern that outflows will increase.

The Bank of Thailand will permit to qualified investors with more than 100 million baht of liquidity to directly invest in foreign equities, bonds, mutual funds and other financial assets, deputy governor Pongpen Ruengvirayudh told reporters Friday. Overseas investments will be limited to US$5 million per year, she said.

Ms Pongpen said the relaxation on outflow rules aimed to help Thais distribute their investment risks and directly contact financial institutions overseas to improve the cost and efficiency of investing.

In 2017, the BoT will relax the regulations further by allowing general retail investors to buy all types of securities.

Ms Pongpen said she was confident the move will not impact the country's foreign reserve nor exchange-rate movements as investors usually hedge rates to prevent risk. 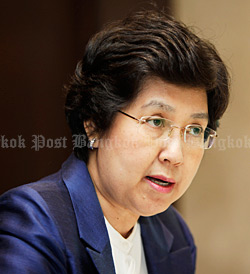 "The central bank is probably more comfortable letting funds flow out through residents rather than making it easier for foreign investors to move cash in and out," said Shigehisa Shiroki, assistant general manager at Mizuho Bank Ltd's treasury department in Bangkok. Orderly declines in the baht look acceptable to the central bank, he said, adding that the currency could weaken to 36 a dollar over the next few months.

The Bank of Thailand made two unexpected cuts to its benchmark interest rate this year to weaken the baht and help exporters. In April, it eased restrictions on outflows by raising limits for Thais' foreign-currency deposits and for overseas property investments.

International investors withdrew a net $1.2 billion from domestic equities this month, poised for the biggest monthly outflows since 2013, according to stock exchange data. They also sold a net $451 million of local bonds.

A recent explosion in Bangkok's central shopping district may cut tourist arrivals by 300,000 this year and trim economic growth by 0.05 percentage point, Ekniti Nitithanprapas, a senior Finance Ministry official, said at a press briefing Friday. The ministry maintained its economic growth forecast for 2015 at 3%.

Ten-year sovereign bonds dropped in the first weekly decline since July, with the yield rising 15 basis points to 2.81%, data compiled by Bloomberg show. The three-year yield climbed six basis points from Aug 21 to 1.64%.