Our second of a six-part series on special economic zones looks at the planned development of the SEZ in Trat province, which borders Cambodia.

Wichan Khantuwarn, 65, a native of Trat, has felt uneasy since he learned of the government's decision to set up special economic zones (SEZs) and name the small, easternmost province as one of 10 designated areas.

He fears that the new SEZ, set to cover three tambons (subdistricts) along the border area of Khlong Yai district, will take a toll on quality of life, natural resources and Trat's verdant environment.

It was Mr Wichan who led local people in 2011 to protest against the planned development of a nuclear power plant. The protests led to the plan being scrapped.

"Koh Chang, Koh Kut and Koh Mak have been the most famous tourism destinations for many decades," he says. "More importantly, Trat is well-known for economically important fruits such as durian, rambutan and mangosteen."

The government wants the border SEZs to provide an opening for investors that use unskilled foreign labour, allowing the entire region to unite and grow.

The integration of the Asean Economic Community is scheduled to take effect by year-end. Thailand, strategically situated in the centre of the region, can play a key role in supporting the AEC in various ways.

Thailand sees the strategy as crucial to speeding up border trade, which accounts for 10% of the country's total exports and is forecast to grow by 20-25% this year.

The target industry varies by SEZ according to specific geographical conditions, available raw materials, and supply and demand.

Mr Wichan says authorities are blowing up mountainous areas in Trat to upgrade Sukhumvit Road, especially the part that links Trat to Hat Lek. The 2.5-billion-baht upgrade, which includes a 36-km stretch of four lanes and 32-km length of two lanes, is scheduled to finish by 2018.

The improvements from Trat to Hat Lek are part of the Southern Coastal Economic Corridor, also known as R-10, under the Greater Mekong Subregion, supported by the Asian Development Bank.

The Marine Department is spending 1.2 billion baht to develop Khlong Yai's seaport with a gross tonnage of 500, a project expected to conclude this year. The port aims to be the hub of logistics services, though there are five existing private ports operating.

"The new seaport encroaches on the sea area and results in a change in the sea's current pattern," Mr Wichan says.

Local people have also voiced concerns that the environment and ecology in Khlong Yai will worsen because of the SEZ.

The district has limited resources for power and water supply. Moreover, there is no sanitation management to treat the existing 60,000 tonnes of garbage. The district's public health system is also overwhelmed.

Mr Wichan says Khlong Yai now has a social problem with foreign migrants, with a large number of illegal Cambodians working at a fishing village in Mai Rut subdistrict.

"A spate of existing problems have yet to be tackled, and we're afraid that the SEZ, once established in Trat, will create new troubles for local people," he says.

In his view, local companies and factories in Trat will gain hardly any benefits or advantages from the SEZ, although the government has set aside 889 rai in Mai Rut subdistrict for an industrial estate, invoking Section 44 of the interim charter to let the Treasury Department assign the property for rental.

"The SEZ project does not cover Trat's core city such as Muang Trat or Laem Ngop, where businesses are bustling," says Pipat Lerkshakul, chairman of the Trat Provincial Chapter of the Federation of Thai Industries (FTI). 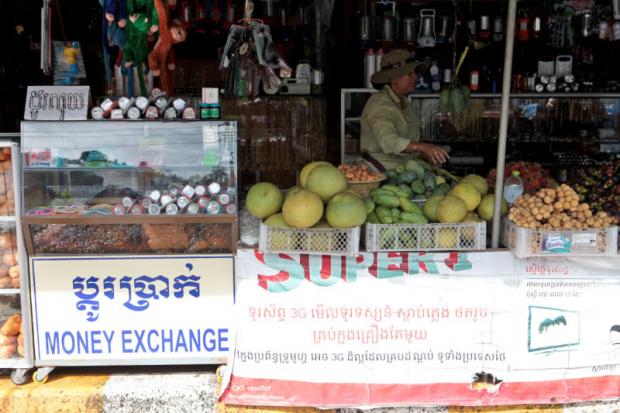 He says only four of the 13 target industries are suitable for Trat: agro-industry and fishery; industrial estates; logistics; and tourism.

Most factories in Trat are engaged in processing fruits or frozen sea products and are mainly small and medium-sized enterprises.

"The economic climate in Trat is unlikely to improve much with the SEZ project because it lacks local business participation," Mr Pipat says. "More importantly, supporting factors are limited to drawing investment."

Uthai Tanchai, chairman of the Trat Chamber of Commerce, agrees, saying the Trat SEZ is unlikely to attract private developers to invest in Khlong Yai.

The Industrial Estate Authority of Thailand (IEAT) recently designated the Khlong Yai Industrial Estate to be administrated by a private developer. Some 70% of the 889-rai land plot is for commercial and industrial areas, while 30% is for basic infrastructure and green areas. The project needs 768 million baht in investment. 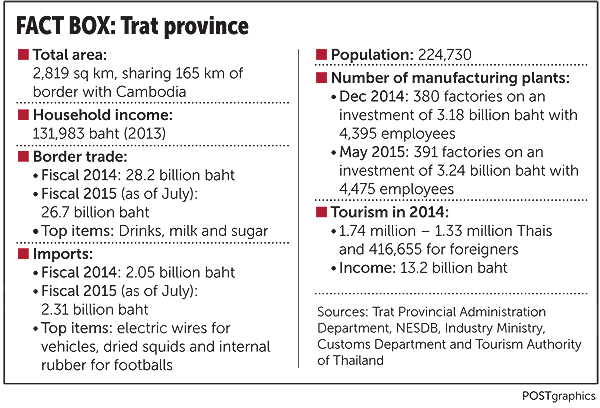 Mr Uthai says it would be best for the IEAT to have full control of the project. He also suggests the government upgrade two temporary permitting areas in Bo Rai and Muang Trat to border checkpoints on an equal footing with the Khlong Yai Customs Station.

The "R10 Road of Paradise" campaign was recently launched to promote tourism in eight Gulf of Thailand provinces in Thailand, Cambodia and Vietnam. The drive is also intended to boost trilateral cooperation in investment, trade and culture.

Despite populist opposition, Trat governor Narong Thirachanthrangkul is positive about the SEZ project in Khlong Yai. He expects border trade through Trat to increase by 10 billion baht this year to 38.17 billion.

The governor has high hopes for the province in any event. "Even without the SEZ, Trat will still be capable of maintaining a healthy organic growth by itself from tourism and border trade," he says. 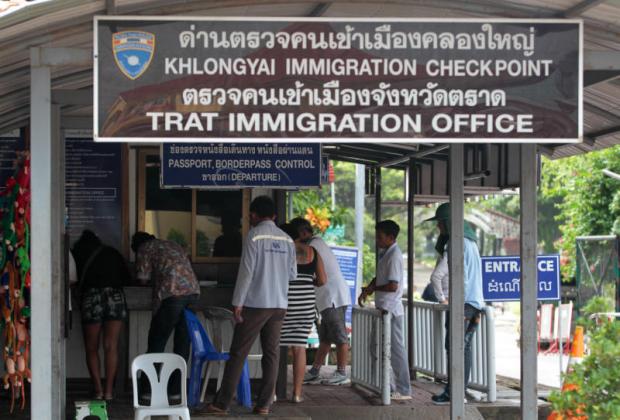 Visitors and tourists go through Khlong Yai immigration checkpoint before crossing the border to Koh Kong province in Cambodia. 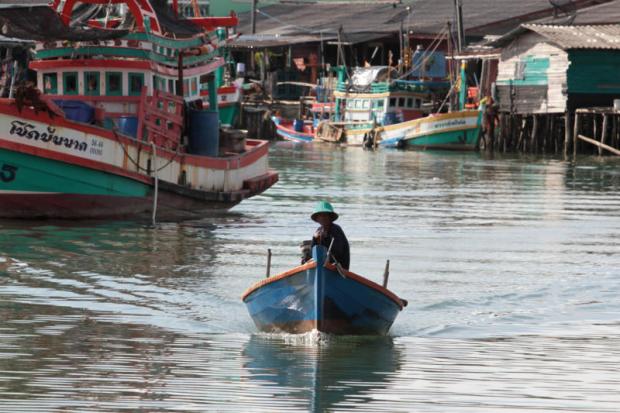 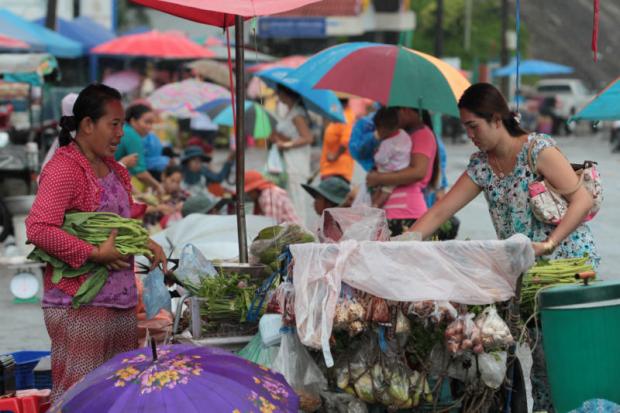 123-Morning market at Baan Hat Lek near the Thai-Cambodian border. Hat Lek is one of three tambons covered by the Trat SEZ.